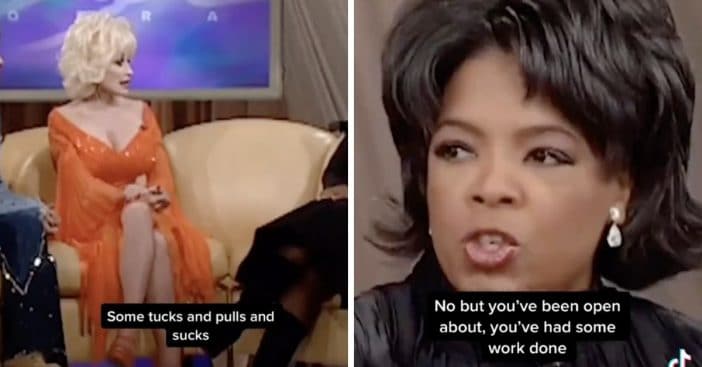 An old clip from an Oprah interview with Dolly Parton has resurfaced, and it has fans questioning Oprah’s true intentions and motives. The old footage from 2003 showcased Oprah asking Dolly how she’s “defying age.” Dolly answers in her usual Dolly-like manner as Oprah continues to push and pry about any “work” that Dolly has had done.

Some people have pointed out that Oprah looked “disappointed” when Dolly simply rolled with the punches and didn’t let herself feel embarrassed by the questions that Oprah asked.

What do you think about this old Dolly Parton interview with Oprah?

i feel like oprah wanted her to be embarrassed but ms dolly said “nope” pic.twitter.com/QuYnxx1fNT

A second clip from that same interview focused on a heavier topic. She brings up the fact that she heard Dolly went into a “huge depression” when she turned 40, but Dolly handles the heavy topic gracefully as always. The clip left fans wondering why Oprah asked this in the first place.

However, it’s worth noting that Oprah’s almost abrasive style of interviewing is no secret – she’s been interviewing that way for years now. She has been called out time and time again for not being as sensitive as she could be with particular topics. It’s worth noting she did the same with the recent Prince Harry and Megan interview, delving into some deep and touchy topics surrounding the Royal family. Definitely nothing new!

RELATED: This Is Why Dolly Parton Stopped Wearing Bathing Suits In The ‘70s

Click for next Article
Previous article: ABBA Drops All New Details Of Anticipated Reunion
Next Post: Tim McGraw Credits One Person For His Life-Changing Sobriety