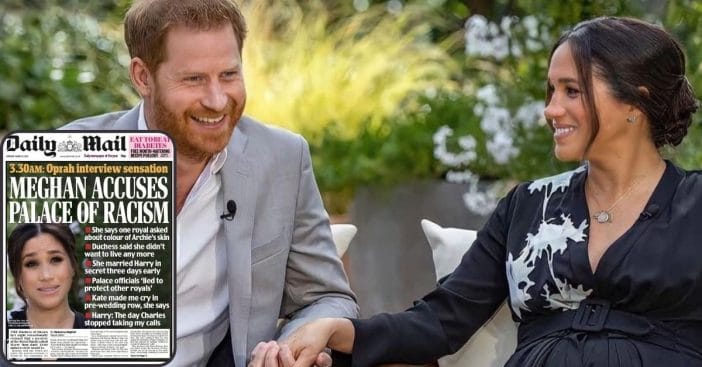 Prince Harry and Meghan Markle recently sat down for an interview with Oprah Winfrey, which has caused UK tabloids to hit back. Meghan revealed a lot of insider info from her perspective in the interview, including that Royal life made her feel isolated, lonely, and lacking in support. So much to the point that she often struggled with suicidal thoughts.

Markle also revealed that people in the Royal family said they were concerned about their son Archie’s skin color, noting that Markle’s mother was black. The couple had previously announced that they would be stepping back from Royal duties, which was met with media scrutiny.

The Daily Mail was one of the tabloids running coverage with headlines after the interview. One of them was, “Meghan claims she was suicidal when she was 5 months pregnant, Kate made HER cry and Royals refused to make Archie a prince because they were worried how ‘dark’ he would be, as Harry reveals their new baby will be a GIRL.”

The website also had a banner that read:  “I WANTED TO KILL MYSELF,” and featured a running clip with subtitles saying, “I just didn’t want to be alive anymore.”

How will they handle the situation?

Another tabloid tore into the couple’s decision to live in the U.S. where they are also raising chickens. “Back to basics at their $14.5 million mansion,” one headline reads. In terms of Royal family individuals being concerned about their son Archie’s skin color, one Daily Mail headline read “MEGHAN ACCUSES PALACE OF RACISM.”

The Daily Express newspaper didn’t hold back saying, “Queen: Duty and family unite us. That’s public service for you, Harry and Meghan … NOT a self-serving TV chat with Oprah.” Only time will tell how Meghan and Harry, along with the rest of the Royals, will handle this situation.