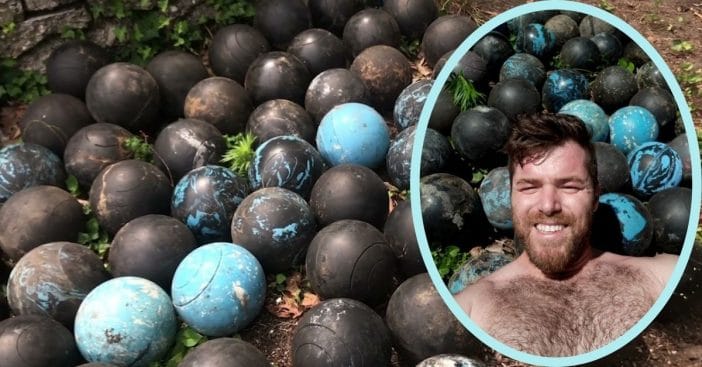 David Olson, 33, landed himself an inadvertent strike when he began renovating his Michigan home and unearthed over 150 bowling balls. He discovered them on July 1, the first sighting taking place in the sand just behind some cinder blocks.

“That was one of the bowling balls,” Olson began, experiencing the first part of one long, confounding discovery. “I didn’t think a whole lot of it. I was kind of assuming maybe there were just a couple in there just to fill in. The deeper I got into it, the more I realized it was just basically an entire gridwork of them making up the weight in there.”

One property housed over 150 bowling balls

Olson had just been working on a home improvement project, which called for demolishing the back steps to his home. That’s when he saw the first batch of bowling balls mixed in with what he anticipated would just be entirely sand.

“I was actually a little happy about that because it’s a little easier to roll bowling balls out of the way than to move the sand and figure out where to put all that,” Olson admitted. At first, he counted 50 when he shared the count on Facebook. Then the number climbed to 120. Then 150. Next, 158. Then, as of July 12, the count became 160.

That number is expected to climb, as Olson himself suspects, “There’s definitely more … but at this point in the area I need to work, I’ve dug down about 2 feet lower than when I found my last ball and I think it’s pretty much cleared out in that section.” But what exactly is the story behind these bowling balls?

Examining the items showed they were from Brunswick Bowling Products, which he contacted – and asked if they might be toxic. After sending some pictures and running some numbers, the company shared that the balls, dating back to the 1950s, were safe and could easily be disposed of. That might be the only possible fate for some of them, as Olson said many were in poor condition, and all seemed to have two grooves carved into them. Muskegon, Michigan used to have a Brunswick bowling ball plant and workers there would indeed use discarded balls as alternatives to sand during construction projects.

Olson plans on using some for sculptures and landscaping. Some are going to his crafty stepfather for furniture legs. And eight went to the local church for a cannon.