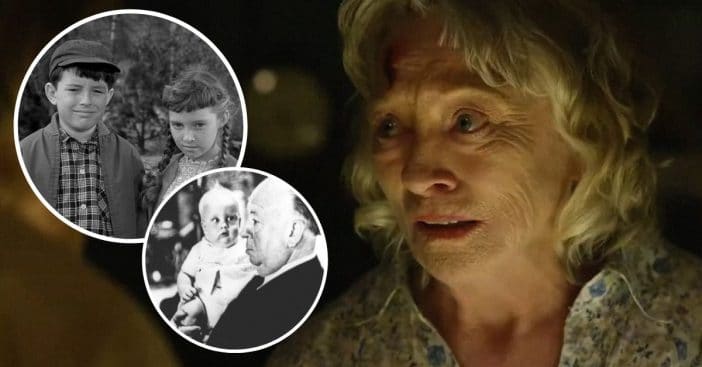 Veronica Cartwright is opening up about some incredible experiences she had acting in the ’50s and ’60s. At 72 years old, she continues to act and is currently working on the film How to Talk with Spirits. Perhaps best known for her role in The Birds, she was also a semi-regular on Leave It to Beaver and gave Jerry Mathers his first on-screen kiss!

While her character Violet gave Beaver (Jerry Mathers) his first kiss, she actually had a crush on Tony Dow in real life! Veronica admitted, “What’s funny is that I actually had a crush on Tony Dow. A big crush on him. I remember thinking whenever we did our classwork just how cute he was *laughs*. But in terms of that scene, I think we were both just mortified! Looking back on it now, it’s just hysterical, but we were certainly embarrassed.”

These days, she still runs into Jerry and Tony and they love to reminisce about spending their childhood on the show. In addition to starring on Leave It to Beaver, she appeared in The Birds. Veronica opened up about meeting the famous Alfred Hitchcock.

She said, “Apparently, he requested to meet me. When I had my first interview, he already knew that I was born in Bristol, England. He went on to tell me that’s where his favorite wine seller was. He then proceeds to name these wonderful wines. Well, I was 12 *laughs*. Then he went on to tell me how to cook a steak and how it had to be a certain temperature on the interior. And then you’d put a piece of aluminum foil over the top of it. That would keep the heat in and then it would be a perfect rare. He said, ‘These are the things you should know before you get married someday.’ Again, I was 12 *laughs*.”

She said that was the interview and she got the part! Sounds very odd but she reveals that Alfred was always very nice to her and she was never intimidated. She added, “He really believed in the magic of movies. I thought it was totally cool. I used to speak to him every day. At four o’clock every afternoon, he would have his tea and biscuits. That’s when everything stopped for him and he would just shut down. And I would just sit next to him. Again, I never thought he was intimidating. I just thought he was really cool.”

It certainly sounds like Veronica has had some incredible experiences and luckily she is open to sharing them!

Click for next Article
Previous article: Michigan Man Unearths Over 150 Bowling Balls During Home Renovation
Next Post: ‘Bonanza’ Officially Ended After This Happened