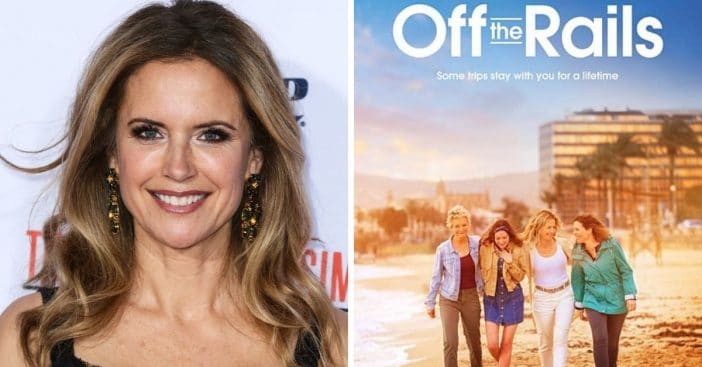 A new film called Off The Rails with Kelly Preston will be coming out soon following the news of her death from breast cancer. The last time we saw Preston in a film was alongside husband John Travolta in 2018’s Gotti. Unfortunately, the film was poorly received, opening to a measly $1.6 million.

Thankfully, that won’t be the last time fans see Preston on-screen. Prior to her death, she finished filming for Off the Rails, starring alongside Jenny Seagrove, Sally Phillips, Elizabeth Dormer-Phillips, Ben Miller, Franco Nero, and Judi Dench.

When will we see Kelly Preston in ‘Off the Rails’?

Variety reports that the film will focus on three friends who are presently in their 50s, recreating a journey across Europe from their youth in order to fulfill their friend’s dying wish. The film marks the directorial debut of Jules Williamson and is based on real-life experiences.

There is no release date planned at this time, but Screen Media purchased the U.S. rights to the film in November 2020 and announced a projected goal to release it in the first half of 2021. Of course, that did not happen, so we’re hoping to get it by the end of 2021. Fingers crossed!

“We are so excited to be bringing a movie about fun, tradition, and love to audiences at a time when we can all use a little more of each of those. We know audiences will love seeing these incredible actresses tell this story,” Screen Media said in a statement last year. “Tragically, Kelly Preston’s passing makes this film’s message of friendship especially poignant, but we are so proud to be able to present ‘Off the Rails’ and Kelly’s performance in it.”

Preston even shared some behind-the-scenes photos from onset back in 2019 when she was filming for it. “Dream come true today shooting with Dame Judi Dench in London for @offtherailsfilms,” she writes at the time, alongside a photo of the whole cast together.