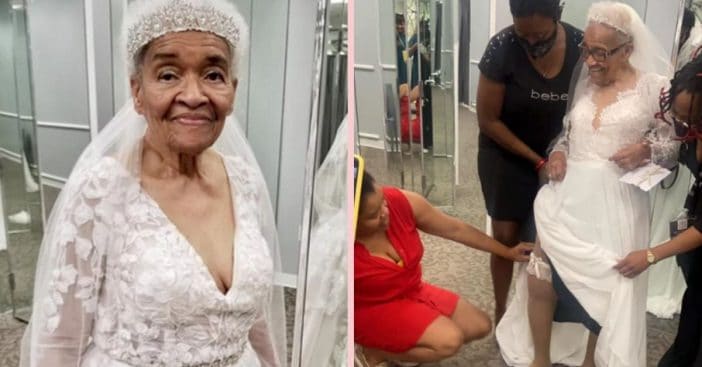 Martha Mae Ophelia Moon Tucker was finally able to wear the wedding dress of her dreams 70 years after she was married. That’s right, she didn’t actually wear a wedding dress on her wedding day. “I’ve always wanted to try on a wedding dress,’” she said under her breath, which her granddaughter Angela Strozier overheard while they were watching Coming to America together.

“She said she never wore a wedding dress when she got married,” Strozier says. “I said, ‘That’s no problem.’ She kinda brushed me off. She didn’t think I would do it.”

With a single visit to David’s Bridal, Strozier was able to make her grandmother’s wish come true. The whole event was posted on Facebook and the story has been shared over 15,000 times. “You know, I can’t even express how special it was. It was too special,’’ she tells AL.com.  “I’ve been wanting to do that a long time, just put one on.”

In 1952, Tucker married the love of her life, Lehman Tucker Sr. However, at that time, Black women were not allowed in bridal shops. With that being said, her family provided her with a navy blue “mermaid dress,” known as a “Carmen Jones dress.”

She has had such an accomplished life

Tucker would then go on to work alongside Civil Rights leaders for voting rights in Alabama. By ’63, she became a registered voter and poll worker. She actually recently retired as a poll worker in November 2020 after working elections for 57 years straight. “Being fantastic is just an understatement of who she is,” Strozier says of her accomplished grandmother.

An emotional moment for all

“Everyone was so elated to help me do that for her,’’ Strozier said. “Everyone was catering to her because I told them her story.” She ended up trying on two bridal gowns, and loved every moment of it. “When she walked out of the room and saw herself in the mirror, she said, ‘Oh, look at me,’’’ Strozier recalls of the moment. “One of the other brides that was in there started crying.”

“I felt like I was getting married,’’ Tucker says. “I didn’t want to take it off, but I knew I had to. I looked good in it though.” Oh, she sure did!