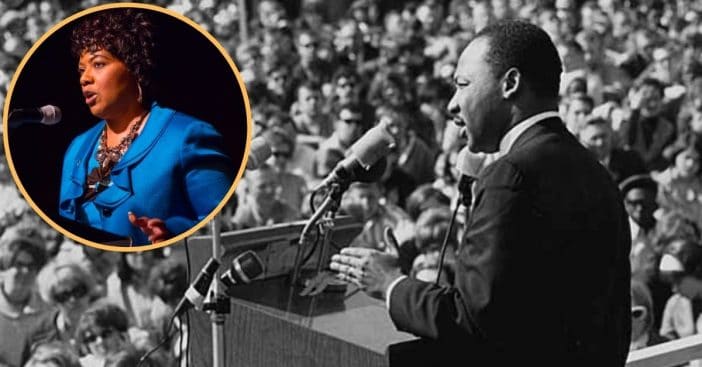 Bernice King had just turned 5 years old when she had to grapple with the reality that she had lost her father, Dr. Martin Luther King Jr., in an assassination. On the 53rd anniversary of MLK’s assassination, Bernice paid tribute to her father and opened up about losing him at such a young age.

“53 years ago today. One week after my 5th birthday. You were gone,” she writes on Twitter. “Assassinated for answering a call to conscience, for speaking truth to power, for being a drum major for justice who sought to rid the world of racism, militarism and poverty. I miss you. Still. Always.”

Bernice King carries on his legacy through works of activism

One week after my 5th birthday.

Assassinated for answering a call to conscience, for speaking truth to power, for being a drum major for justice who sought to rid the world of racism, militarism and poverty.

I miss you. Still. Always. pic.twitter.com/jXcwYWLep0

Attached to her message is a very moving photo of Bernice face-to-face with a statue of her father, which appears to be at the Martin Luther King Jr. Memorial in Washington, D.C. The civil rights activist and his wife, Coretta Scott King, had four children. Bernice is now 58 years old and serves as the CEO of the Martin Luther King Jr. Center for Nonviolent Social Change.

RELATED: 5 Things You May Not Know About Rev. Martin Luther King Jr.’s ‘I Have A Dream’ Speech

Just ahead of the anniversary of her father’s death, Bernice also shared video of his final speech, which was presented on the evening of April 3rd, 1968 in Memphis, TN. “I’ve seen the Promised Land. I may not get there with you. But I want you to know tonight, that we, as a people, will get to the Promised Land,” MLK said at the time.

The whole family is getting involved

My father’s final speech, given the evening before he was assassinated, 53 years ago today.

“I may not get there with you.” pic.twitter.com/8uClQSdC4m

It was the following evening when MLK was shot on a balcony at the Lorraine Motel in Memphis. He was rushed to the hospital and then pronounced dead at age 39 an hour later. Decades later, the importance of MLK and his activism continues through the legacy of his family. His granddaughter, 12-year-old Yolanda Renee King, even spoke with TODAY about her legendary grandparents.

“She did a lot,” Yolanda said specifically of her grandmother. “And what most people don’t know, and they don’t acknowledge it as much, is that she was a human rights activist, so that didn’t mean just racial equality. She worked on rights for the LGBTQ community. She worked on women’s rights.”