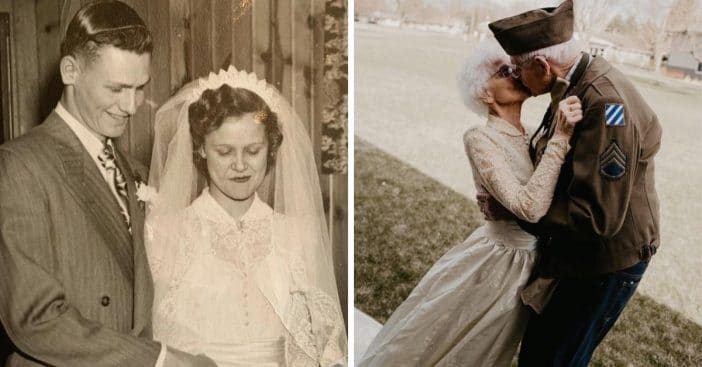 87-year-old Nancy Lubbers recently wore her original wedding dress to celebrate her 70th anniversary with her husband, 91-year-old Melvin. The two first met at a skating rink when Nancy was just 16, and seven decades later, they have five children, 12 grandchildren, and 21 great-grandchildren.

They decided the best way to celebrate 70 years of marriage together was to have a special photoshoot in the family garden with the photos taken by their youngest granddaughter, Anna, who is a professional wedding photographer.

“My grandparents only have a couple of photos from their wedding day,” Anna says of her grandparents. “I came up with the idea to take photos of Grandma in her dress and then my mom, Melissa, found Grandpa’s Korean War Army suit for him to wear.”

Nancy originally purchased her dress for about $35 and her veil for $15, and when asked how she felt about wearing her gown again, she said, “It really was an honor that I could still get in it…. My dress was something special and I loved it, so I just preserved it and kept it all these years,” she added. “It felt really good to wear it again and we had fun reminiscing about our wedding day and the photo shoot was a lot of fun.”

Shortly after the two were married, Melvin was called to serve in the Korean War as a tank commander for eight months, meaning they had to completely forgo a honeymoon. Fast forward in life, they were able to raise their children with Nancy working in a grocery store and Melvin working as a salesman and maintaining a hobby farm. 70 years later, they share their own secret for a happy and long marriage.

“You won’t always agree, sometimes you have a disagreement, but when you have one of those you sit down and talk about it and come up with an answer — and once it’s resolved, don’t bring it back up,” Melvin says. And Nancy kindly adds, “Always respect each other even when you don’t agree. Just make the best of your life.”

RELATED: 70 Years After She Was Married, Woman Finally Wears Wedding Dress Of Her Dreams

Click for next Article
Previous article: Jay Leno Comments On Will Smith’s Oscar Slap Controversy: ‘Disturbing’
Next Post: Garey Busey Argued About How Heaven Looks In Movie After Claiming He’d Been There