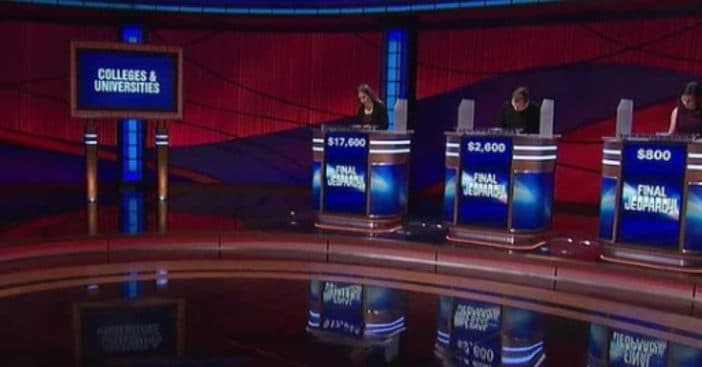 A recent Jeopardy! episode hosted by guest host Dr. Sanjay Gupta irritated some fans. Some thought the Final Jeopardy clue was way too easy! Generally, it is supposed to be a very difficult question to determine who is the winner of the episode.

The final question was in the category of Colleges & Universities. The clue read, “In 2019 this public university attempted to trademark the word ‘The’ for use on clothing and hats.” Many sports fans around the country knew the answer right away and were shocked by how easy the question was.

The answer was The Ohio State University and one fan tweeted, “That’s the easiest final jeopardy answer I’ve ever seen and it made me SO MAD.” Of course, all of the competitors guessed the answer correctly.

Another fan said, “As an Ohio State fan, I can say that this was the easiest final Jeopardy question ever.” I suppose it would be more difficult for non-sports fans out there, although many people hear about things like this on the news!

What do you think? Was the question too easy for a Final Jeopardy clue? Watch below:

Click for next Article
Previous article: Sharon Osbourne Seen Out With Daughter Aimee After Controversial Exit From ‘The Talk’
Next Post: Danny Trejo Recalls When Charles Manson Asked Him For Protection