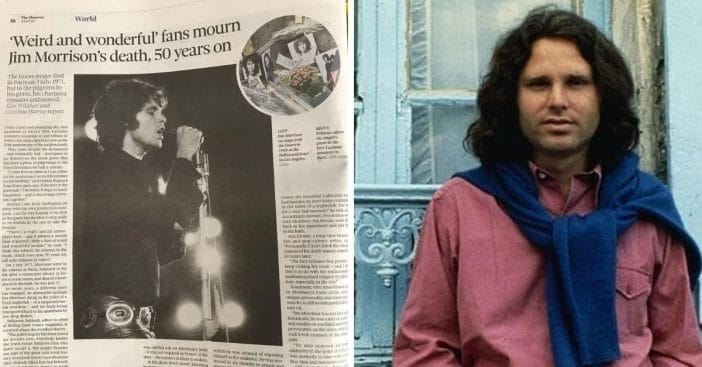 Fans recently remembered Jim Morrison of The Doors on the 50th anniversary of his death. Specifically in Paris, where the rock legend passed away, fans came to the Pere-Lachaise cemetery in eastern Paris where he is buried. Many fans brought candles, pictures, and burned incense sticks near his grave.

“Jim and The Doors have been heroes of ours since we were kids. It’s an honor to be here and celebrate the 50th anniversary of his death today,” says 50-year-old fan Dutuar Platzek. He made the trip from Halle, Germany with his childhood friend Mathias Barthel.

Another fan, Michelle Campbell, was 21 when Morrison died at age 27 in 1971. During one of the anniversaries of Morrison’s death in 1989, she remembers the grave being unmarked. It was her personal, “first July 3rd,” and she remembers meeting so many other fans that soon became friends. She recalls, “(It’s like) people sitting around on couches in someone’s apartment, rather than a grave’s, just talking and meeting each other… It was really lovely … I still come as much as I can because it’s just always so wonderful.”

Fan Colleen Amblard drove seven hours from her hometown in the French Alps to visit. The 21-year-old tells AP,  “it’s very emotional to be here, to remember Jim Morrison … to show that he’s not forgotten… We acknowledge his talent and the fact that he was a brilliant person, he was really a genius.”

On July 3rd, 1971, Morrison was found dead in a bathtub. No autopsy was performed, so his cause of death is still largely. disputed to this day. He was one of several stars to die at the age of 27, including Jimi Hendrix, Janis Joplin, and Kurt Cobain. Morrison and The Doors rose to fame with hits such as “Light My Fire,” “Break On Through,” and “Hello I Love You.”