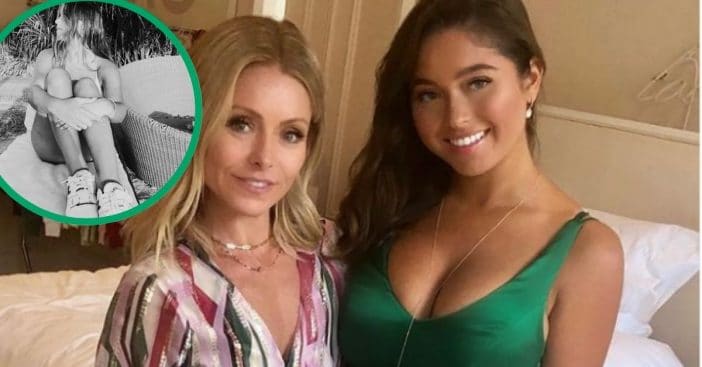 On Wednesday, June 16, Kelly Ripa wished a happy 20th birthday to her daughter Lola. She took to Instagram to share a black and white picture of Lola sat on the ground and gazing to the side. It’s Ripa’s caption that’s the source of all the festive giggles.

Ripa dubbed the new 20-year-old “the little lady with the big feet,” referencing how, in the picture, Lola’s sneaker-clad feet are front and center in the shot. As of a week later, the post has gained 80k likes and over 1700 comments from followers.

Kelly Ripa captioned her birthday post to Lola, “Happy 20th birthday to the little lady with the big feet @theyoungestyung.” The post then includes a slew of festive icons such as hearts, birthday cakes, and party streamers.

The caption goes on, “We love you so much! You are our favorite daughter, no doubt! (This was the approved photo).”

Apparently, Lola had some say in what photo her mother could use for a birthday tribute that would be seen by over 2.9 million followers. Though, as one user noted, “Approved photo,” with a check mark, “approved caption? Jury is out.”

Lola Consuelos is the daughter of Kelly Ripa and Mark Consuelos. The two met via the soap opera All My Children, on which Ripa was already a regular. Upon first meeting her, Consuelos didn’t think his chances high, but he got a part and got the girl both – and a higher pay.

Lola’s siblings include Michael Consuelos and Joaquin Consuelos. Michael is the eldest sibling in his twenties living in New York and though “he loves the freedom. He hates paying his own rent and is chronically poor.” Joaquin – along with Lola before she went off to college – loves giving his famous mother trouble with hijinks that Ripa usually has no problem returning.

Click for next Article
Previous article: Whatever Happened To Todd Bridges From ‘Diff’rent Strokes’?
Next Post: Goldie Hawn Has Cutest Reaction To Granddaughter Rani’s ‘ABC’ Recital