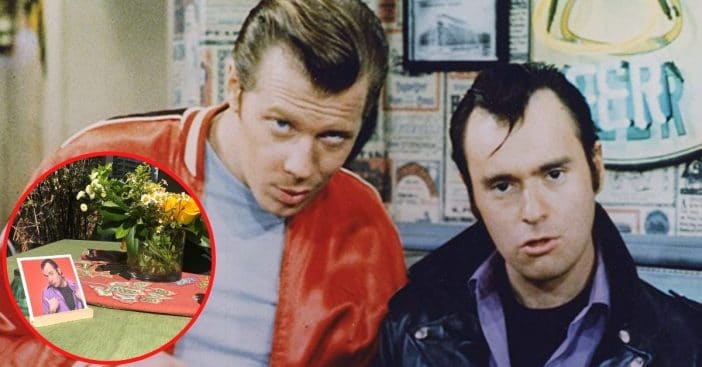 Michael McKean recently shared a touching memorial tribute to his late Lenny & Squiggy partner David Lander. He showcased a print photo of Lander and a vase of flowers set outdoors in the sunlight. He had been at a belated memorial service for Lander, which takes place months after his passing.

“Some memorial services are funnier than others. Thanks for the laughs, pally,” McKean simply writes. McKean and Lander created the iconic characters Lenny and Squiggy when they were still in college at Carnegie Mellon University. Their characters made it all the way to TV on shows like Laverne & Shirley. Lander sadly passed away in December 2020 from complications of multiple sclerosis.

Some memorial services are funnier than others. Thanks for the laughs, pally. pic.twitter.com/mWGFl9rMpf

Lander was 73 years old when he died and is survived by his wife, Kathy Fields Lander. McKean released a public statement following the news of his partner’s death, saying, “He was as funny as he always was until the end… He was the funniest man I ever knew.”

RELATED: David Lander, Squiggy from ‘Laverne and Shirley,’ is Dead at 73

Lander took a true leap of faith and left everything behind to pursue a career in comedy in L.A. back in 1967. McKean would follow in 1970, and the two would perform in a group of comedians called The Credibility Gap, which would ultimately land them on Laverne & Shirley.

Lander was later diagnosed with MS in 1980 and utilized his platform to help others also suffering from the disease. His wife had told reporters that the big turning point was when Lander was honored with a fundraiser by the National Multiple Sclerosis Society’s Dinner of Champions. “It changed our lives forever,” she said at the time. “He went on to do speaking engagements around the country, talking about his life and how he copes.”
Lander had also written a memoir about his experience with MS called Fall Down Laughing: How Squiggy Caught Multiple Sclerosis and Didn’t Tell Nobody. When it was finally published, he had said, “I guess my biggest use now is in helping anyone with this disease by putting a face on it. And it’s a face that is still walking.”
Click for next Article
Previous article: Arnold Schwarzenegger Admits That His Kids Hated When He Was Governor
Next Post: Hungry Patrons Gather From Near And Far To Keep Last Arthur Treacher’s Fish And Chips Standing