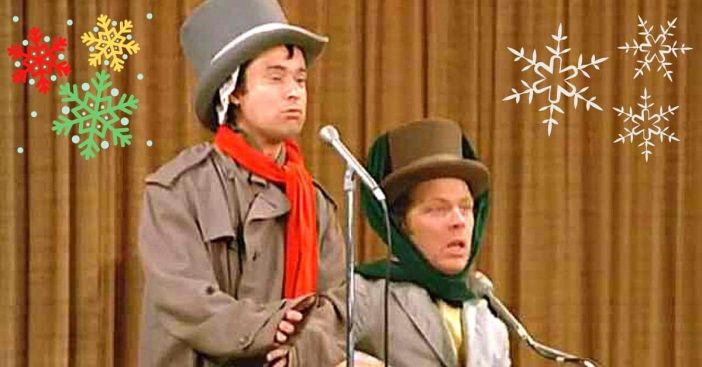 Late in December, 1976, Laverne and Shirley took up their latest well-intended misadventure: singing carols at a hospital. The idea sounds easy enough to pull off. But soon, they run into an unexpected hitch and, naturally, misadventures ensue. But the season two episode proves perfect for spreading festive cheer thanks to Lenny and Squiggy, or rather, Lenny and the Squigtones.

With other powerhouses at play in the episode, Lenny and the Squigtones sometimes go overlooked. But the preliminary performance proves to be a classic way to kick the Christmas season off just in time for Santa Claus.

The misadventures of friends Laverne DeFazio and Shirley Feeney frequently involve Lenny Kosnowski and Andrew Squiggman. Together, this quartet of friends, neighbors, and roommates alike earned the show two Golden Globes and a Primetime Emmy. By its third season, Laverne & Shirley became America’s most-watched show overall, not even just sitcom.

Before this big accolade, the sitcom had a memorable season two episode. Entitled “Oh Hear the Angels’ Voices,” this holiday special could also be called “Christmas at the Booby Hatch.” And what a Christmas it was. Everyone decides to sing carols for the needy and the sick, which gave Lenny and Squiggman time to break out their old act: Lenny and the Squigtones. Except, they didn’t actually know their venue.

Lenny and the Squigtones take the stage

As it turns out, the gang isn’t at any hospital. They’re at a mental institution. Naturally, Shirley’s confronted with memories from her own mother thinking about sending her to such a place. They make it work, however, much to the audience’s enjoyment, but not without some help. That’s where Lenny and the Squigtones come in.

Technically, their performance, the episode’s first, wasn’t meant to be its biggest or most memorable. But it remains a comedic way to usher in Christmas. Written by Michael McKean and David Lander, it chronicles the descent of Santa Claus himself with the title “The Jolliest Fat Man.” Watch below and maybe start a new old Christmas tradition. That episode overall features a lot of moments worthy of rewatching like Laverne and Shirley’s uppity “Winter Wonderland” and WKRP in Cincinnati‘s future Dr. Fever Howard Hesseman, as MeTV notes.

Let’s check back with the incredible cast of Laverne & Shirley: