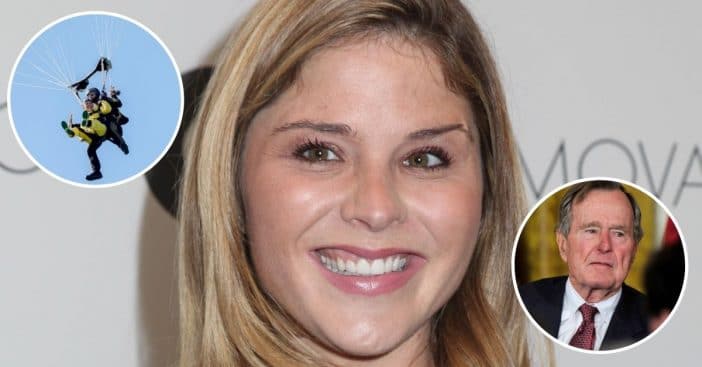 Jenna Bush Hager recently went skydiving on live television. The segment was on The TODAY Show, where Jenna works. She said she went skydiving to honor her late grandfather, George H.W. Bush. Turns out that on his birthday, he would go skydiving sometimes. So, Jenna decided to honor him by carrying on the tradition.

She admitted that before he passed away, he told her, “Don’t forget to enjoy the game. Don’t be scared to be in the ring, and don’t forget to enjoy every moment — to live every moment.” To help her with the dive, she asked for the help of the Golden Knights. They are the Army’s parachute team and George used them to jump when he went skydiving.

It was a very special moment for Jenna and she said it helped her feel close to all her family members who have passed away. She said, after the experience, “It feels like floating, but it’s one of the most exhilarating, terrifying moments of your life. I feel close to all the people I’ve been missing.” She even said she would do it again, “a thousand times!”

George went skydiving eight times during his lifetime. He was only 19 years old during his first time and the year was 1944. Jenna added, “Seven years after the last time he jumped. I jump for him. And I will jump because I’m in the game, enjoying every moment and feeling closer to him in the heavens.”

What a great idea! Watch the video below:

Click for next Article
Previous article: Find Out The Full Cast For ‘The Waltons’ Reboot Movie
Next Post: Mick Jagger Had Profanity Hurled At Him During Rock And Roll Hall Of Fame Induction