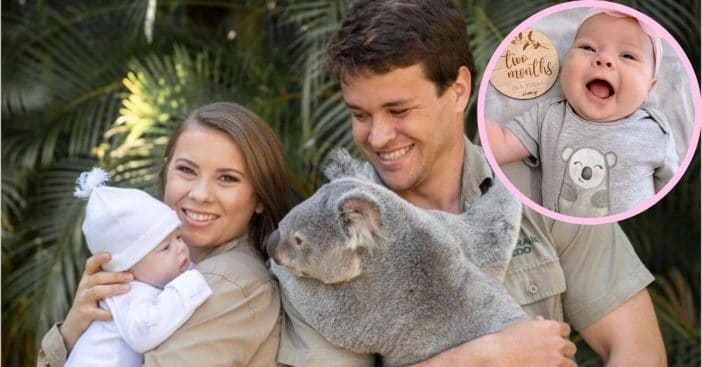 Two months ago on March 25, Bindi Irwin and husband Chandler Powell became parents to baby Grace Warrior Irwin Powell. As Grace rounded this milestone, her parents shared new photos of her in a very koala-themed photoshoot.

On top of looking adorable with her big smile and festive onesie, Grace is already following in her grandfather Steve Irwin and parents’ footsteps of helping animals. She may not know it yet, but she’s living up to that middle name of hers and looking too cute all the while.

On Tuesday, both Bindi Irwin and Chandler Powell shared photos of their daughter Grace as she turns two months old. On Chandler’s Instagram, he holds a koala while standing beside Bindi, 22, while she holds Grace.

Tagging on the photo indicates the trio – or quartet – was at the Australia Zoo, which is owned by the late Steve Irwin’s widow Terri Irwin. The location became famous through the lens of The Crocodile Hunter. In the captions of his post, Chandler writes, “2 months old,” adding a koala picture before continuing, “We have had lots of smiles, the best giggles and we’ve met a koala! We love you, Grace Warrior.”

Though Grace never got to meet her grandfather, Steve Irwin was famed for his conservation zeal and his endless knowledge and respect for wildlife. Irwin’s first exposure to crocodiles and dedication to the environment came when he was very young, a tradition Bindi’s daughter Grace is carrying – maybe not yet with crocodiles so much, but with koalas.

In a series of photos posted to Bindi’s Instagram, baby Grace is seen laying down and beaming up at the camera while wearing an adorable koala onesie. “Two months old and our beautiful Grace Warrior is all smiles! She is the happiest little light in the world,” Bindi writes. She then affirms that this warrior is following in her family’s footsteps, adding, “P.S. For those wondering, her super cute outfit supports conservation and you can find it in the link in my bio.”

The link in question then leads to the Australia Zoo’s shop. At the bottom of the page, the text reads, “Australia Zoo is proud to fund various national and international Conservation Projects. Our current projects are successfully helping to protect many species including crocodiles, tigers, rhinos and cheetahs. When you visit Australia Zoo, Sponsor A Conservation Project, Adopt An Animal or place an order on our Online Shop, you’re helping us to protect wildlife and wild places.”