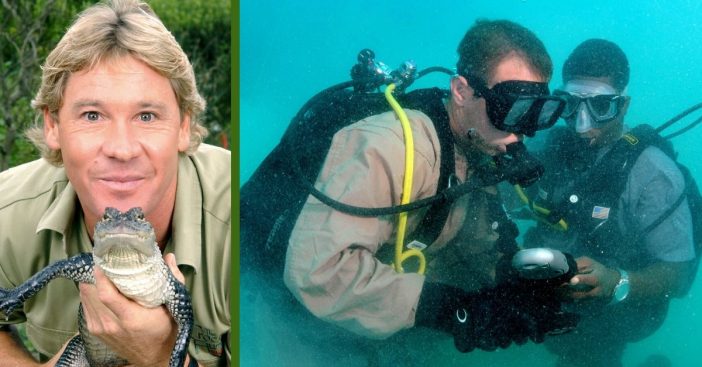 Scott Jones, an American diver, tells the story of when the incredible Steve Irwin saved his life. He originally told this story back when the world was learning the news of Irwin’s tragic death. “He saved my life,” Jones says to AAP back in 2006. “I’ve lost a good friend.”

Jones was, unfortunately, part of a scuba diving expedition in the Sea of Cortez off the coast of Mexico that turned fatal. His friend, 77-year-old Katie Vrooman, would die during the dive as a sea surge knocked her against the rocks. Jones would fight to hold onto her for two whole hours to resuscitate her. Sadly, Jones would eventually have to let go of her body and would spend a night alone perched on those rocks.

Coincidentally, Irwin and his team happened to be in the vicinity of Jones, shooting for a documentary. That’s when Irwin got the SOS call for two divers that had gone missing. Irwin had never met these two divers but completely bailed on filming to go on a search for them. Jones was sitting on one of those same rocks when Irwin finally located him. At the time, Jones didn’t realize that Irwin was somewhat of a celebrity. He had never heard of the ‘Crocodile Hunter.’

“After they got me on to the main boat, Steve helped me get my wetsuit off me and he went below to do something,” Jones says. “Somebody behind me said ‘So what do you think of the Crocodile Hunter?’ So I was looking around for Crocodile Dundee. I thought when the makeup comes off Dundee’s looks must change. But, when I finally got home my daughter turned the Animal Planet channel on and I started watching his show from then. It was wild. He was jumping on crocodiles and things like that.”

They remained close to the Irwins after Steve’s death

Jones and his wife would send flowers to the Irwins when they learned of Steve’s passing. They even planned to go to Australia at the time to tell Terri and the kids how amazing of a man he was. “He was a hell of an educator, from kids all the way up to old farts like me,” Jones says. Jones continues, “He was a hero.” Jones touches on Steve’s death, saying he was surprised that a stingray caused his death. He notes that stingrays are “one of the most gentle creatures in the ocean.”