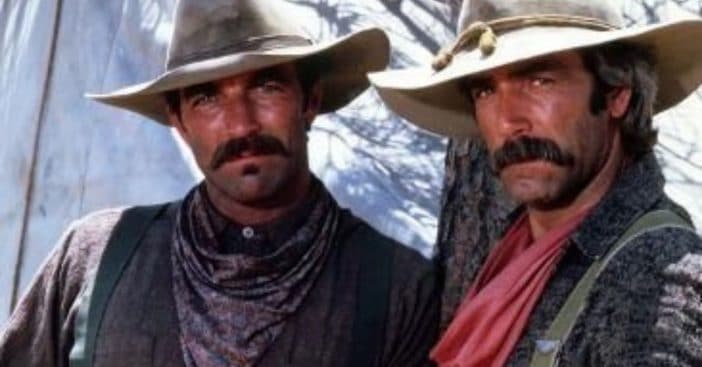 Some Hollywood duos become fast associated with one another. Owen Wilson and Ben Stiller often populate movies side-by-side, and Kurt Russell and Goldie Hawn even became a couple. There’s no forgetting Tom Hanks and Meg Ryan, either. When the two near-constantly took up roles in westerns together, Tom Selleck got to watch Sam Elliott grow in his career, but also see how steady he was in his goals.

In fact, even when the two looked very different from how they do now, to Selleck, Elliott seemed already on the western path he meant to travel, while Selleck himself was still finding himself. But both still had to discover their future iconic mustache looks.

‘Lancer’ was the start of something great

The year is 1969 and Lancer is well into its first season. For the 14th episode, entitled “Death Bait,” IMDb summarizes it as “A man with a vicious dog and a grudge against Jelly terrorizes Murdoch, Teresa and Jelly at Lancer while Scott and Johnny are away on a cattle drive.”

The episode included its usual cast of James Stacy, Wayne Maunder, Andrew Duggan, and so on. It also had some actors passing through as they navigated their careers playing minor roles such as Dobie and Renslo. Both were played by relatively clean-shaven men gradually building their filmography. They were Tom Selleck and Sam Elliott respectively.

Over the months into years into decades, Tom Selleck, a bit like Sam Elliott, would tackle different genres and mediums of entertainment. Today, his most recent hit comes from the crime drama Blue Bloods. But his career started off as versatile as it ended up being today after a stint in the middle of exclusively western titles.

At that particular time, though, Selleck could look at Elliott and see someone with a better idea of where his future would go. “Sam and I were already good friends,” Selleck reminisced. “Fox had a new talent program, like the old studio system; were in it. I’ve always said Sam was more formed in those days, [knowing] exactly what he wanted. I was still learning the craft.” At the time of that episode, Selleck would have been 24 years old and Elliott just a year older, if that. Something in Elliott’s particular experience or vision for himself made for a better-defined path, however, and Selleck picked up on it right away.