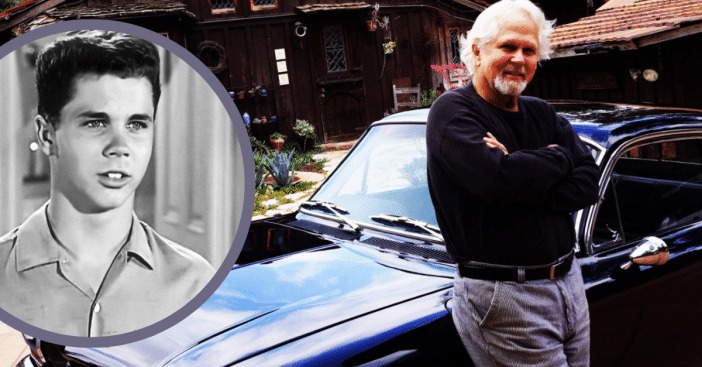 In the late ’50s, Leave It to Beaver became a household favorite. Following a curious Theodore “The Beaver” Cleaver, the show followed Beaver’s adventures at home, school, and around the neighborhood. While Beaver’s adventures held the front of the show’s storyline, Theodore’s older brother Wally, played by Tony Dow, held a fun role as well.

While many fans know Tony Dow for his role as the Beaver’s older brother, many might not know that the actor was quite the car man as well.

In addition to his fondness for cars, Tony Dow is a long-term buddy of Fireball Tim Lawrence. Lawrence is a Hollywood concept artist responsible for designing more than 400 Hollywood movie cars. Some of his works include the 1989 Batmobile and cars seen in The Avengers, The Dukes of Hazzard, Starsky and Hutch, The Green Hornet, and the Fast and the Furious. Currently, Fireball Publishing is taking on automotive coloring books. These books’ subjects include stars like Gary Wales, Syd Mead, and, most recently, Tony Dow.

The Official Tony Dow Coloring Book is written by Dow and his wife, Lauren. The book is illustrated by Fireball Tim and covers Leave It to Beaver, Dow’s work as a sculptor, cars, and more.

An Accidental Role for a Car-Loving Kid

Classic Cars Journal reports that Dow admitted he landed the part of The Beaver’s older brother almost by accident. When the original boy cast for Wally proved to be too mature for the role, producer Harry Akerman remembered Dow and offered him the role. “I had almost no acting experience,” Dow told Classic Cars. “Which was probably the best thing about me, I was not affected by that whole Hollywood scene.”

While Leave It to Beaver was not the typical car-oriented show, there were multiple episodes in which the vehicles played a large part. Additionally, a couple of episodes featured future drag racing star, “TV Tommy” Ivo. The star played Duke Hathaway in “Blind Date Committee” and “Wally’s Play.”

Tony Dow continued in his conversation with Classic Cars Journal about his childhood. “My buddy and I used to take the engine off his dad’s lawnmower and make these cool cars we’d drive around the neighborhood,” Dow said. “The writer of the show heard the story and wrote a script about it and even rented my car for the show.”

In Leave It to Beaver, Tony Dow played around with many different cars as Wally Cleaver. In season 5, Wally finds himself lucky after The Barons invite him to join their club. The Barons, if you remember, was a popular group of boys who scored the prettiest girls and drove the best cars. Wally spends $220 for a 1953 Chevrolet in one episode, and in another, takes his father’s 1963 Plymouth Fury.

The first car Tony Dow bought himself, however, was a 1962 Chevrolet Corvair Spider. In ’65, Dow sold the car to a prop man at Universal Studios named Al. However, when Al fell ill in 2015, he left the car to his friend Marty. Before passing over rights to the car, Al left specific instructions that if they could find Tony Dow, the car would go back to him.

“So after 50 years, my first car has returned to my garage,” Dow told Classic Cars Journal. “It’s painted black now, but the original plate is still on it with a frame that reads ‘unsafe at any speed’— Ralph Nader’.”