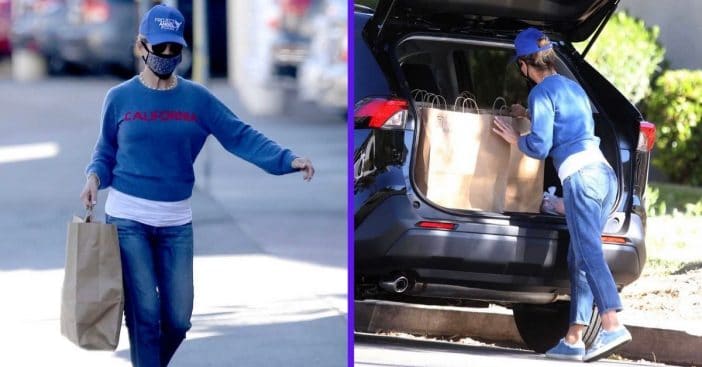 Lori Loughlin has been laying low since she was released from prison following the college admissions scandal. However, she was recently spotted for the first time since her release performing volunteer work for Project Angel Food.

Users on Twitter didn’t believe that this was just a random act of kindness on Loughlin’s part, and even think a lot of it was staged. “Aunt Becky (Lori Loughlin) was spotted for the first time since she was released from prison. During her first outing, we see her doing charitable work for Project Angel Food. These photos don’t look staged at all!!” One user says.

Aunt Becky (Lori Loughlin) was spotted for the first time since she was released from prison.

During her first outing, we see her doing charitable work for Project Angel Food. These photos don’t look staged at all!! pic.twitter.com/TMAMtANpn0

The former Fuller House star is sporting a blue sweater, sneakers, jeans, a sweater, a baseball cap that features the charity she’s working for, and a face mask. Mercury News reports that celebrities often work with paparazzi to stage photos and have paparazzi take photos of them as they’re performing tasks such as this. These photos were actually taken the day after Netflix released the trailer to Operation Varsity Blues, a documentary deep-dive into the college admissions scandal.

What we know about Loughlin and her husband’s prison time

Go inside Operation Varsity Blues – a.k.a the College Admissions Scandal — with this innovative documentary that combines interviews and narrative recreations of the FBI’s wiretapped conversations between Rick Singer and his clients. pic.twitter.com/JzjqMEByQN

Loughlin is expected to be a prominent part of the documentary as she and her husband Mossimo Giannulli (along with over 30 other parents) were accused of bribing universities to grant their child admission into the school. In Loughlin and Giannulli’s case, they were charged with paying $500,000 to get their daughters, Olivia Jade and Isabella, admitted to the University of Southern California. After a while of fighting the charges, they ultimately pleaded guilty.

Loughlin was sentenced to serve two months in prison (which she completed) and her husband is currently serving a five-month sentence. Loughlin was also ordered to complete 100 hours of community service, and it seems like she’s definitely keeping up with those requirements (staged or not).