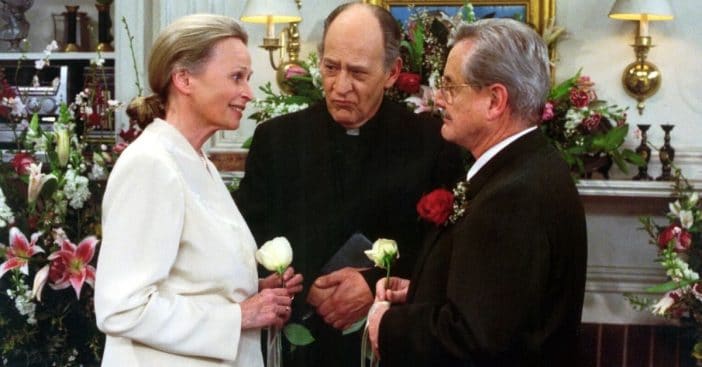 William Daniels and Bonnie Bartlett have been married for almost 70 years. They will celebrate their 70th anniversary on June 30, 2021. William is best known for his role as George Feeny on Boy Meets World while fans may know Bonnie from Little House on the Prarie. Both starred in the medical drama St. Elsewhere and Bonnie made an appearance in Boy Meets World as well. Now, both are in their 90s and look back on their life together.

William said, “I think our relationship is based on mutual respect and I think she is smarter than me, a better actor than me, and so I just hang out, you know, and try to get along.” Bonnie quipped back, “He doesn’t mean that at all!” It seems that laughter is what keeps their romance going after all these years. She said, “He makes me laugh. His humor, his sense of humor and his ability during every day to find something funny is really good for me because I’m very intense.”

It hasn’t always been easy. In 1961, a decade after they got married, Bonnie gave birth to a son that died 24 hours later. Then at some point, Bonnie’s niece was killed. At the time, William wanted to move to Hollywood but Bonnie was just not ready. During the height of his fame, William also admitted to drinking a lot. Even through all of their struggles, they have stayed married and worked through things.

Eventually, they moved and that’s when Bonnie got the gig on Little House on the Prairie. They had adopted two sons by then. Bonnie said, “Suddenly, working like that and living in a little house in the valley with the boys and finding a nice school for them and everything, I sort of connected with him again. It took a little while – it took about a year of really hating him. And that we have had this long marriage and now I’m totally, I mean, we totally respect and adore each other. We’re together all the time.”

Congrats to the couple on 70 years of marriage!