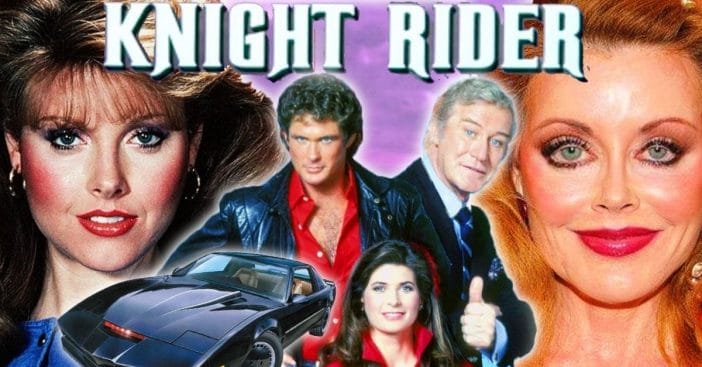 A sleek talking sports car complete with a mounted scanner? Yes, please! Knight Rider was one of the coolest shows ever, virtually a live-action comic book, and it’s time for Super Pursuit Mode. We would high-speed drive ourselves and park our butts on the couch on Friday nights to watch Michael and K.I.T.T. fight some bad guys. Michael with his powerful kicks aided by K.I.T.T., the super-intelligent and nearly indestructible car. Can we call him a car? It would seem “partner” would be more appropriate.

So successful was Knight Rider during its 1982 to 1986 original run that it it went on to produce two spinoff TV movies (one featuring David Hasselhoff) and the series Team Knight Rider (1997 to 1998) and Knight Rider (2008 to 2009).  But K.I.T.T. will never be forgotten, his own success such that he even made crossover appearances on Diff’rent Strokes, when Hasselhoff and K.I.T.T. rescued Arnold and Dudley. Most recently, Walmart made a commercial promoting their new curbside pickup service featuring K.I.T.T. We’re taking a look back into the cast of Knight Rider and see what they’re up to today.

Michael Knight was a loner in a dangerous world. A hulking hunk with a sense of humor, who could kick some heads in. He was an operative of The Foundation for Law and Government and worked with K.I.T.T. to fight crime.   David Hasselhoff became a cult icon for this 80s television series. But his acting career really kicked off in ‘75 taking over the character of Dr. Snapper Foster for seven years on the soap opera The Young and the Restless.  He was then courted by NBC for Knight Rider, which Hasselhoff drove to his next pop culture smash hit, Baywatch. David portrayed the lead male character, L.A. County Lifeguard Mitch Buchannon.

Even with the mammoth Baywatch success, Hasselhoff always looked to Knight Rider as a role of a lifetime and that it was more than a TV show, saying, “It’s a phenomenon. It’s bigger than Baywatch ever was. It was how one man really can make a difference.” This coming from a man who single-handedly backed Baywatch after a season one cancellation and turned it into an 11-year global sensation, with its finale being seen by nearly a billion viewers across 140 countries.

In 1991, Hasselhoff reprised the role of Michael Knight in the television sequel film Knight Rider 2000. The movie served as a pilot for a proposed new series, but despite high ratings, the plan was abandoned. But don’t hassle the Hoff — despite this, the man knows how big of a cultural icon he is, engaging in a lot of self-parody, from appearances in Piranha 3D to Dodgeball.  His music career paralleled his TV success and he blew up in the 80s, especially in Germany where he’s achieved a god-like status. But his music career doesn’t stray too far from parody either, highlighted by his hysterical song called “Jump in My Car” — another Knight Rider reference.

In 2008 Hasselhoff launched a social networking site, known as “HoffSpace”, where layouts feature the star in different set-ups.  Around this time, however, the Hoff was in hot water when a video surfaced of him severely intoxicated eating a cheeseburger shirtless on the ground, as his daughter yelled to “stop abusing alcohol.” It’s sobering for the rest of us. Today at 69 years old, David is a recovering alcoholic, and we do wish him the best.

Bonnie Barstow was the lead engineer for Knight Industries who looked after K.I.T.T.’s condition. She was often seen rocking a white jumpsuit and was a stunning complement to Hasselhoff. Unfortunately, she was fired after season one, replaced by Rebecca Holden to apparently add more sex appeal. David was not happy with the actress swap and McPherson was brought back for Season 3 and beyond.

Patricia McPherson got her start in 1978 but didn’t hit it big until 1982’s Knight Rider.  Post Bonnie Barstow, she guest-starred on some shows, like the prime time soap Dynasty. In 1991, following two episodes of Andy Griffith’s Matlock, she decided to retire from acting. She has since embarked on a career of wildlife conservation, and today at 67, her efforts have included helping preserve Wetlands in Southern California.  Keep up the important work, Patricia!

Devon Miles is the head of The Foundation for Law and Government, and brought respectability and class to this often campy show. Miles was known for being an old-fashioned, no-nonsense kind of guy, and perfectly played by Edward Mulhare. Edward got his start in acting long before Knight Rider, his career gaining traction with nine episodes of 1956’s The Adventures of Robin Hood. He enjoyed some film success starring alongside Frank Sinatra in 1965’s Von Ryan’s Express.

His biggest break of all was in the 1968 to 1970 supernatural sitcom Ghost & Mrs. Muir, as Mulhare passionately portrayed the Ghost Captain. His final role was in 1997 in the romantic comedy, Out to Sea, starring with the legendary Odd Couple pairing of Mr. Jack Lemmon and Walter Matthau. Mulhare was known as a ladies’ man and was a lifelong bachelor. He died in 1997 at the age of 74.

April Curtis replaced Bonnie as the mechanical engineer looking after K.I.T.T. She was lively and a decent replacement, but many were glad to see Bonnie return. Holden began her glamorous career as a model, specifically, ‘The Breck Girl’. She then began booking one-off episodes of some stellar shows, including Three’s Company and Barney Miller.

After her season of Knight Rider,  she played the diabolical Elena on the ABC soap General Hospital. She’s also a very gifted singer! In 1989 she charted two singles in the form “The Truth Doesn’t Always Rhyme” and “License to Steal.” Today she’s 63 years old, and last seen in an episode of the 2020 revival of the hit 90s show, Saved by the Bell and in the lead role of the 2021 film Canaan Land.

Reginald Cornelius III, or simply RC3 entered the dynamic in Season 4. Bonnie actually enlisted RC to help rebuild K.I.T.T. after the situation with the Juggernaut, and he serves as a backup of sorts for Michael Knight. Peter Parros entered the entertainment industry to become “the black Arnold Schwarzenegger,” and although he’s no Terminator, he has had quite the career. After Knight Rider, he had a huge break as the leading character in 1989’s The New Adam-12.

Then in 1997 he once again supplanted himself in a regular TV role, appearing in 59 episodes of the soap opera As The World Turns where he returned as recently as 2009. Today at 61 years old, he recently starred on TV alongside Bo Duke’s John Schneider in The Haves and the Have Nots.

Wilton Knight is the founder of the Foundation for Law and Government. Knight’s character served not only as the billionaire who saved Michael’s life and helped him re-invent himself as a crime-fighting hero, but he also provided the opening narration. This was his last acting credit of a stellar career, that began back in 1947.

Many will remember him as Ishmael in 1956’s film adaptation of Moby Dick. He was a big fan of the sea apparently, as his biggest TV role was Admiral Nelson in the sci-fi seriesVoyage to the Bottom of the Sea. Basehart died in September 1984, He was 70 years old.

Daniels gave vocal life to the 1982 Pontiac Trans Am, AKA, K.I.T.T. the highly-advanced super-intelligent car that was fond of humans and extremely personable.  Daniels’ career took off in 1967, cast as the lead character in the short-lived series Captain Nice as well as playing Dustin Hoffman’s disapproving father in the classic film, The Graduate. The 80s is when Daniels gained international fame, starring as the acid-tongued Dr. Mark Craig in the medical drama St. Elsewhere. He was nominated for five Emmys for the role, taking home two trophies. During this time, he simultaneously voiced his iconic K.I.T.T., both for NBC. Daniels would record the voice-over while on set for St. Elsewhere, saying: “My duties on Knight Rider are very simple. I do it in about an hour and a half. I’ve never met the cast. I haven’t even met the producer.” Obviously, he eventually did.

And he would lend his voice to K.I.T.T. whenever a show prodded him, like The Simpsons or even the Lego video game. Daniels has stayed hugely relevant in practically every decade, with the 1990s bringing him another iconic TV role as the role model teacher Mr. Feeny in Boy Meets World. Today he is 94 years old and was last seen reprising his Mr. Feeny for the spin-off show, Girl Meets World in 2017. He sure has taught us all a lot.

Knight Rider was truly a fun show for the whole family. Did you watch this show back in the ’80s? If so, what’s a great episode you remember? What about when Hasselhoff played Knight’s evil lookalike, Garthe Knight? Did you watch either of the spin-off TV movies or the 1998 attempt at a reboot show? Let us know in the comments, we wanna hear from you.

Click for next Article
Previous article: Cleavon Little From ‘Blazing Saddles’ Started A Family Before His Death At 53
Next Post: ‘80s Supermodel Kathy Ireland Is Now 58 And An Author