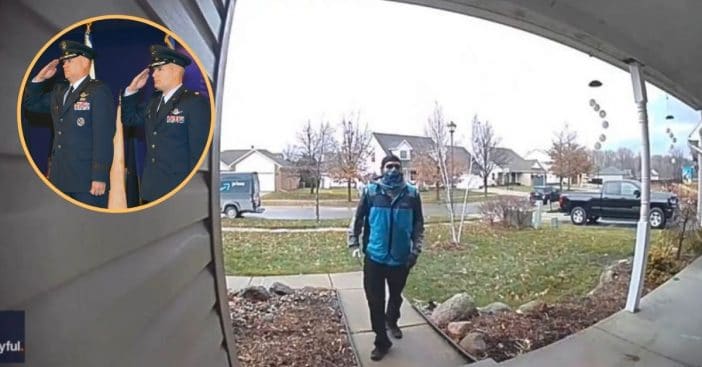 An Amazon delivery driver stopped in front of a house to deliver not only a package, but also a salute to the home of an active Air National Guard member in Michigan. The delivery driver learned that the home belonged to a U.S. Air Force member after seeing a sign on the family’s front porch.

The heartwarming moment was captured by the homeowner’s Ring camera, taking place on December 12th, 2020. The driver delivers the package, takes a photo for proof of delivery, rings the doorbell, and turns to head on his way. However, he soon turns around to face the house and gives a quick salute before heading off on his route.

Amanda LeCureaux is the homeowner who got the notification on her phone from Ring that her package was delivered. Upon reviewing the notification, she saw the kind gesture from the delivery driver. She went on to tell news outlets that her husband has been an active Air National Guard member for 13 years. LeCureaux said that they were both honored by the heartwarming gesture.

RELATED: The Air Force Is Asking People To Adopt Their Retired Military Dogs

Take a look at the full video below!

Click for next Article
Previous article: At the Height of Beatlemania, ‘Mary Poppins’ Star Julie Andrews Proclaimed Her Love for The Beatles
Next Post: ‘Little House’ Actress And ‘Knight Rider’ Actor On What Makes Their 70-Year Marriage Last