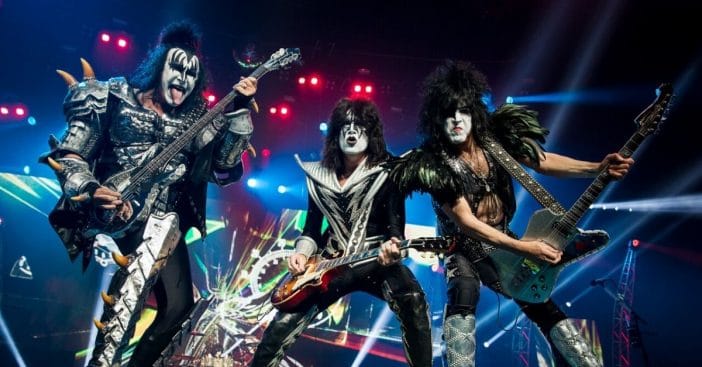 On New Year’s Eve, KISS played a very special show. They held a Livestream event in Dubai and set two world records! These world records were confirmed by the Guinness Book of World Records and included a record for “highest flame projection in a music concert” — 35 meters (nearly 115 feet) and the “most flame projections launched simultaneously in a music concert” — 73. Holy cow!

KISS was likely going for the record because they spent over $10 million on the production of the show. They played on a huge stage and utilized lots of special effects and high-quality cameras to make the show as incredible as possible. The show was called ‘KISS 2020 Goodbye.’

Band members Paul Stanley and Gene Simmons were interviewed about the show and asked the age-old question, “Is rock dead?” Paul said that “the only music that consistently sells out concerts on a large scale is rock and roll.” However, Gene chimed in, “Rock is dead. And that’s because new bands haven’t taken the time to create glamor, excitement and epic stuff.”

RELATED: Do You Remember The ‘CHiPs’ Halloween Episode Inspired By Kiss?

Gene has spoken several times that he believes rock music is dead because there haven’t been any iconic bands in recent years, in his opinion. He once said, “From 1988, until today — that’s more than 30 years — tell me who the new Beatles is. You can’t.”

He continued, “You know, the modern artists rely so much on technology. You may not be able to recognize the artist if they record themselves singing in the shower. You’d be shocked. And none of the rappers play instruments. Don’t write songs. They write words. But chords, melodies, harmonies and stuff. It doesn’t mean that rap isn’t important. It’s very important. But it ain’t the Beatles.” Do you agree or disagree?

Click for next Article
Previous article: Here’s What Happened to Fred Gwynne, from ‘The Munsters’ to ‘Youts’ and ‘My Cousin Vinnie’
Next Post: Tim Allen Said It Was ‘Horrible’ Filming ‘Last Man Standing’ Season Premiere