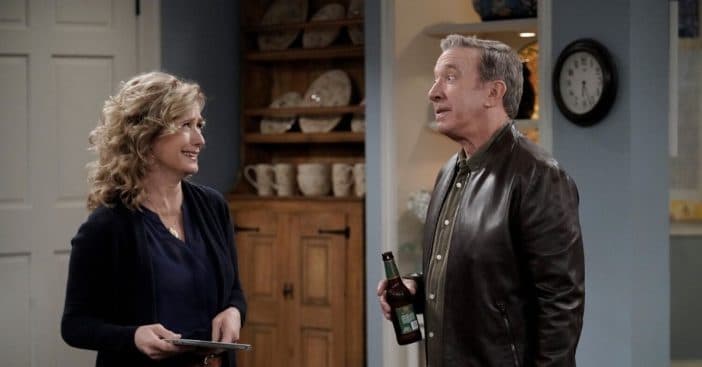 Last night, FOX aired the final season premiere of Last Man Standing. The show is currently in its final season and this season features a big surprise guest: Tim Taylor! Tim Taylor is the character that Tim Allen played in Home Improvement. During an episode of Last Man Standing, Tim Taylor meets Mike Baxter. Confused yet? It is okay if you are because Tim Allen said it was actually very confusing to play both characters in the episode.

Tim even said that it was “horrible” filming the final season because he knew it would be over forever soon. He said, “It was really confusing for me to play Tim Taylor, who, I think of Mike Baxter is an evolution of that character. He’s smarter, went to college. We don’t know whether Tim Taylor was really stupid or really smart. I mean, I played the guy I wasn’t sure.”

It isn’t just Tim that feels bittersweet about the ending of Last Man Standing. His onscreen wife, Nancy Travis said, “I feel like because we show up to work going ahhhhh (“crying”) I can’t…” She revealed that the final series will include, “Just the everyday things that you ponder and wonder about…. the girls are grown now and they come in and out of our lives and we have grandchildren.”

Did you catch the season premiere last night? What did you think of it?