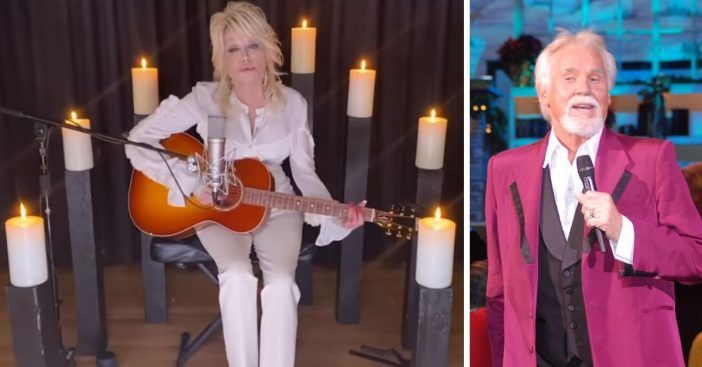 Many country artists came together to pay tribute to the late Kenny Rogers during the CMT’s GIANTS Kenny Rogers: A Benefit For MusiCares. Dolly Parton gave one of the most emotional performances of the night. It was especially emotional because Dolly and Kenny were good friends for many years. Dolly decided to sing Kenny’s song “Sweet Music Man.”

She sat with just her guitar and a microphone, surrounded by beautiful candles. She dressed in all white. The gorgeous singer crooned the song that goes, “Oh, but nobody sings a love song quite like you do / Oh, and nobody else can make me sing along.”

The concert, where artists performed virtually from their homes, was to honor Kenny and raise money to fight COVID-19. Margaret Comeaux, a CMT executive producer, released a statement that read, “Kenny Rogers transcended genres and generations with his musical versatility, legendary collaborations, and timeless appeal, and we’re honored to pay tribute to his legacy.”

She continued, “Particularly in these turbulent times, we’ll stop and take a moment to allow the memory of our dear friend Kenny to bring us together and inspire us to lend support to those in the music community who are most in need.”

Click for next Article
Previous article: Jimmy Fallon Pairs Up With ‘SNL’ Alums Will Ferrell And Kristen Wiig For Soap Opera Parody
Next Post: Rob Lowe Shares His ‘Tiger King’ Look And Says He’s Working On An Adaptation