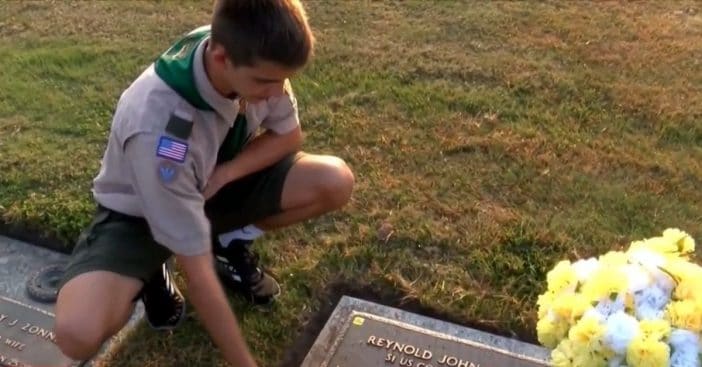 Highland Memory Gardens Cemetery, located in Waterville, houses approximately 1,000 veteran graves. Sometimes, keeping up after them becomes difficult. But no challenge is too daunting for one Boy Scout who dedicated his Eagle Scout project to cleaning those veterans’ graves.

Within the Boy Scouts of America (BSA) program, Eagle Scout stands as the highest rank and honor a Scout can achieve. Earning it requires dedicated community service time. For his, Andrew Baker chose a very personal project.

This is Boy Scout Andrew Baker’s senior year in high school at Anthony Wayne High School, according to NBC. Outside of his studies, he enjoys video games and playing hockey. Additionally, he contributes to his community through the BSA program. He intends on becoming an Eagle Scout with a big final project. For his, he and his family are cleaning up graves belonging to fallen veterans.

As a result, he trims away overgrowth, washing stones, and replacing every marker. In just two weekends, they addressed 60% of Highland Memory Gardens Cemetery’s graves.”I decided to choose this project because I have a lot of family in the military, or have been veterans,” Andrew explained. “It just felt like the right project for me.”

Bringing the endeavor to life

Although he’s a teenager, his mother Karen Baker feels glad he stuck with the BSA program. “He’s learned a lot. I feel like it’s helped him become the kid that he is, which is a great kid.” She further believes the project was a very good, community-enriching project. Even though they did not quite anticipate the magnitude of their endeavor, she considers it “really rewarding.” Others believed as much too, as she revealed, “There’s been lots of people that have stopped when we’ve been out here working over the weekend, and thanked us.” Through passion and hard work, the Baker family’s task of cleaning veterans’ graves helped Adam, the community, and those who came before.

Click for next Article
Previous article: Whatever Happened To Chevy Chase, Clark Griswold From ‘National Lampoon’s Christmas Vacation’?
Next Post: 1970s Design Is Scheduled To Make A Comeback In The Wake Of The Pandemic