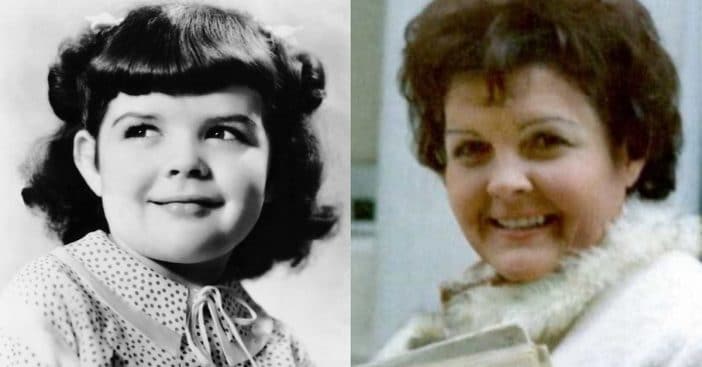 It’s no secret that many cast members from The Little Rascals had sad and tragic endings to their lives, many from an inability to transition from child actor to adulthood, but there have been some notable exceptions. Among them were Jackie Cooper, Spanky McFarland, and Darla Hood, the latter of whose story is particularly sad given that her death could have been so easily avoided.

In 1962, Darla actually reflected on the problem with many child stars, commenting, “They think they are better than anyone else. They don’t learn to give to others. They are on the receiving end of a lot of adulation that gradually knocks out any humility they had. And my mother was every inch a stage mother. Mom pushed me, sure, but she didn’t force me down producers’ throats like some of the other mothers. And she always had my best interest at heart.”

Darla was born on November 8, 1931 in Leedey, Oklahoma, and was a part of The Little Rascals from 1935 to 1941, starting at the age of 4 in Our Gang Follies of 1936 and continuing until she was the ripe old age of 10 with 1941’s Wedding Worries, for a total of 50 films. She worked at MGM for an additional couple of years. “I was 12 when I left,” she recalled. “It was just as well, because it was becoming pretty evident that I wasn’t a little girl anymore.”

RELATED: ‘The Little Rascals’: Sadly, the First Pete the Pup Was Poisoned, But the Family Tradition Carried On

In a 1974 interview with the Scrantonian Tribune of Scranton, Pennsylvania, Darla recalled, “I was born in a small town in Oklahoma and I guess my mother wanted to get out of there, because she took me to Oklahoma City and signed me up with a dancing teacher. My dancing teacher talked my mother into letting me go to New York City, where I wound up leading the band at the Edison Hotel and caught the eye of the Our Gang casting director. I signed the contract in 1935 when I was three years old and did my first Our Gang film a year later.”

When she joined, her co-stars included Spanky, Buckwheat, and Alfalfa. “We were together for eight years,” she said. “My first recollection of playing as a child was on the Our Gang set. They told me that I would have to come and do my lines before I could go back to my dollhouse to play.”

As she explained, if there were any behind the scenes problems, they were with Alfalfa and his attitude. “He was the troublemaker. He was in a particularly ornery mood the day we were filming a dog catcher sequence. We had to jump on the back of the truck and cry as the dog catcher drove away. The first time the truck drove away, Alfalfa fell off and I made the mistake of saying the exhaust fumes of the truck were making me sick. May I tell you that Alfalfa fell 32 times? I finally passed out and had to be taken to the hospital and revived.”

Life Outside of the ‘Gang’

Following Our Gang, Darla made a few other films, but also embraced a bit of normalcy in her life as she attended Los Angeles’ Fairfax High School. As a teen, she started a vocal group under the name Darla Hood and the Enchanters, and they had success doing background music for a number of movies, was a regular on Merv Griffin’s radio show, recorded about a dozen records, and enjoyed ongoing success as a nightclub performer. She also appeared a number of times on TV with Groucho Marx and Jack Benny. On top of all of that, she began recording many commercial jingles, which turned out to be very lucrative for her.

Of Jack Benny — whose The Jack Benny Program featured her on a recurring Our Gang Sketch in which he played Alfalfa and Eddie “Rochester” Anderson was Farina — she recalled in 1962 that she’d met him 20 years earlier. “Jack was a big star even then,” Darla pointed out. “He came to our set at MGM one day to watch us rehearse. We must have done a funny show, because he howled with laughter and told me he’d like to do a picture with me someday.”

Darla was married twice, first to Robert W. Decker, a singer, and insurance salesman, from 1949 to 1957; and then to record company executive Jose Granson from 1957, and together they had three children.

All told, Darla had a very successful personal and professional life, but on June 13, 1979, she was brought to the hospital for an appendectomy. Following the procedure, she died of a sudden heart attack. The reason? The blood given to her in a transfusion during surgery was contaminated with hepatitis. Just such an unfortunate and unnecessary way to die.

Not long before her death, Darla happened to catch a big-screen revival of Our Gang and found it amusing in one particular way: “The only thing is that the little girl up there on the screen — me — was a total stranger. As though I had never seen her before.”

Now let’s check back in on all our favorite rascals…