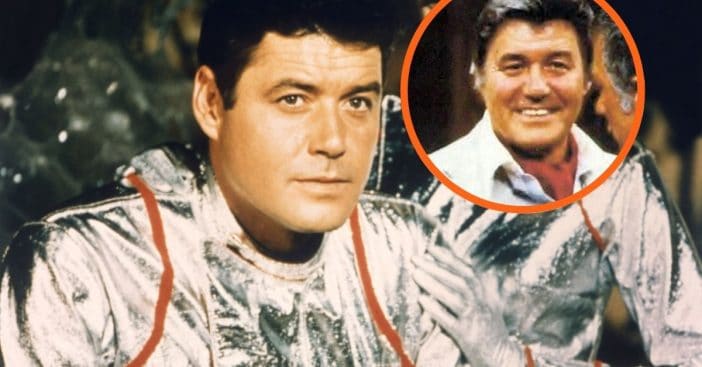 Danger, Robinson family! A family voyage into space would quickly turn into an ongoing adventure to correct course. Thanks to the wicked machinations of Dr. Smith, the Robinson family would end up Lost in Space. Heading this family was John Robinson, an expert in planetary geology and astrophysics alike.

Wearing a black hat, mask and cape, and wielding a sword that allowed him to “make the sign of the Z,” Zorro fights for the freedom of 1820 California and would-be tyrannical rulers. At the same time, he walks among the people without costume as Don Diego de la Vega.

Whether you’re talking about the vibrant-colored space suit of Robinson or the black-clad Zorro, both heroes were brought to life by actor John Williams.

Guy Williams, at first known as Armando Joseph Catalano, was born on January 14, 1924, and he called New York home for many of his formative years. Early on, his interests were varied: chess, math, and football among them. But, standing at 6 ft 3 with dashing good looks, those around him encouraged Williams to pursue acting. So, even though he proved a gifted student, he ceased his studies to become an actor.

Why did Guy Williams leave ‘Bonanza?’

Guy Williams’ path to acting fame began shakily, forced to find employment as a mechanic, salesman and, eventually, model. Changing his name from Armando Catalano, he finally signed a contract with MGM. Once he got his foot in the door, Williams became a mainstay in Hollywood, where he moved to and eventually found love through work. Additionally, his extensive sports background made Williams the perfect candidate to play Disney’s then-upcoming Zorro. After some additional fencing training, he put his acting skills and handsome looks to use as the masked vigilante Don Diego de la Vega.

RELATED: Taking A Look At The Cast Of ‘Lost In Space’ Then And Now 2022

Fans might have seen him in another big title: the 1964 season of Bonanza. They had a brief chance with him as Ben’s nephew Will Cartwright. After Pernell Roberts departed the show, Williams was supposed to revive the Cartwright quartet, but contract hiccups put a quick end to that. As a result, he traded the cowboy spurs and black mask for a spacesuit in 1965 as Professor John Robinson — a role that brought with it a certain level of frustration.

“When you’re the head of an exemplary family like ours,” he told The Salt Lake Tribune in 1966, “you have to be an exemplary father as well, and that means you can’t just go storming off to the wars. You have to think of the family’s security, and that kind of relegates old Dad to the sidelines. There are times when I’d like to buckle up the old swash again.”

Playing Zorro won Guy Williams a lot of love in Argentina. When he first visited in 1973, he received a great deal of praise, interest, and admiration thanks to the role. So, when Lost in Space ended, the question of retirement rose to the forefront. Ultimately, Williams decided to retire to Buenos Aires where he could live in comfort in the place he actually felt rather at home in. Though he did return stateside for themed segments of Family Feud that pitted the Robinson family against residents of Gotham (Batman) and Gilligan’s Island.

In 1989, Williams was just 65 years old when a brain aneurysm took his life. Even after his passing, his peers in Argentina loved and respected his work, so his ashes remained in the Argentine Actors’ Society cemetery for two years. In the States, he became the first name on the Bronx Wall of Fame, shined with his own star on the Hollywood Walk of Fame, and earned the official title of Disney Legend.

Click for next Article
Previous article: What’s Happening With Motorcycle Bans And Restrictions On Public Roads?
Next Post: Tom Selleck Is In It For The Long Haul With His Show And His Wife