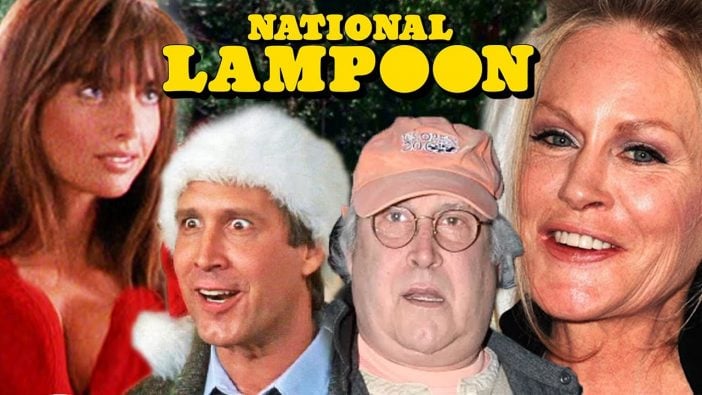 “Can I refill your eggnog for you? Get you something to eat? Drive you out to the middle of nowhere and leave you for dead?” No better intro to such a classic Christmas film than that, huh? The National Lampoon Film franchise has become a powerhouse collection, with one of the most famous being National Lampoon’s Christmas Vacation – and also being my personal favorite. Written by the great John Hughes, who penned such classics as The Breakfast Club and another holiday favorite, Planes, Trains and Automobiles – this one does not disappoint.  There’s just something about watching the pressurized chaos of a father trying to create the perfect Christmas memories when nothing will go right.

Today we’re checking out the cast of National Lampoon Christmas Vacation to see what they got into after having to take down all the Christmas lights, ’cause after all, “the little lights are not twinklin’, Clark.”

Clark Griswold is brimming with excitement to give his family the perfect Christmas at home. Something I think we can all relate to. And his begrudging family is forced to accompany him on all the necessary traditions, like cutting down your own behemoth of a Christmas tree, high-speed sledding, and of course, decorating the house so it’s visible from outer space. Most people know Chevy from The Prime Time Players, aka, Saturday Night Live’s inaugural cast. Chevy actually worked with National Lampoon before playing Word Association with Richard Pryor.

Check out DoYouRemember’s favorite sketches from the golden ’70s after this, that’s one definitely on it. 2 years before SNL, in 1973, Chevy was part of National Lampoon Television Show: Lemmings Dead in Concert, along with John Belushi and Christopher Guest. More on Chris Guest later in this video!

After SNL, Chevy had some major film successes, starting with 1978’s Foul Play, which earned him two Golden Globe nominations! Then it was 1980’s golf wise-crack, Ty Webb, in Caddyshack that ultimately catapulted Chevy to multiple franchises like Fletch and of course, National Lampoon’s Vacation in 1983. Chase’s life hasn’t been as happy-go-lucky as Clark Griswold’s though. He was plagued by drug addiction in the ‘80s, actually being admitted to a hospital for his addiction to prescription painkillers. A back injury during SNL being the initial cause. Then in 2016, he was once again hospitalized for his alcoholism. Thankfully, Chevy has been sober since 2018!

One of his more successful recent jobs was back on the tube, being part of a stellar acting core in the comedy series Community. Today at 77, he’s not really slowing down, one of his last projects was a 2019 Netflix buddy comedy starring him and Richard Dreyfuss called The Last Laugh, check it out if you haven’t already!

Ellen Griswold, the perfect complement to Clark, and has a bit more common sense than her optimistic husband. But we can’t rid her of all blame, after all, it is her cousin Eddie who comes to wreak festive havoc and fill the sewers up with combustible poo-fumes. But her deadpan flipping through the magazine as her sap-covered fingers adhere to each page, exemplifies her comedic talents.

After getting her start on Broadway, being a talented singer, she transitioned to films in the mid-’70s with a breakthrough role being 1978’s Clint Eastwood-led film, Every Which Way but Loose. Then she earned a Golden Globe nomination portraying the legendary Patsy Cline in 1980’s Coal Miner’s Daughter. She has since appeared in over 60 films, with her Ellen Griswold leading the way – but she also has dramatic chops, and she showed those off playing Ed Norton’s mother in American History X. Later in her career, she had a recurring role as a domineering Agent in HBO’s Entourage and just recently co-starred with Sigourney Weaver in the film, The Good House. One thing’s for certain, at 69 years old, Bev is far from done.

Rusty Griswold is in Christmas Decoration Hell as he untangles endless lights and is constantly being beckoned, with a loud, “Russ” – even if he is right next to him. Galecki started acting in 1987 and immediately got two Holiday Classics, in addition to his Russ, he also was part of 1989’s Prancer.

Then Galecki turned his attention to TV, and never looked back. You will certainly remember him as David Healy from 1992’s Smash hit, Roseanne. And from one monumental show to another, in 2006, he helped make The Big Bang Theory one of the most-watched TV shows of all time through its’ 12 season run.  In 2018, Forbes estimated he was the world’s second-highest-paid TV actor, earning $25 million. No wonder he wasn’t impressed by Grandma’s “Whole Quarter”.

Audrey Griswold is the moody teenager who is not thrilled, relegated to sharing a room with Russ while their grandparents are visiting. She freezes solid while picking out the family tree. So funny.  Juliette Lewis is the daughter of character actor Geoffrey Lewis, and she began acting on TV at just 14 years old. Audrey Griswold was a huge film break for the young actress, and she further supplanted her star-status gaining an Oscar nod for Martin Scorsese’s remake of Cape Fear in 1991.

The 90s were good to her, with starring roles in popular films like 1994’s Natural Born Killers and ‘96’s From Dusk Till Dawn. Aside from her acting chops, she also has a musical side, as she went on to form the rock band Juliette and the Licks in 2003. She even has her own solo material as well with her most recent studio album being released in 2017 called Future Deep.  Today in her late 40s, She really does it all, including supporting Little Kids Rock, a nonprofit organization that works to restore and revitalize music education in disadvantaged U.S. public schools.

Gotta love cousin Eddie. Oblivious to all social cues and impervious to embarrassment, what a character. Many of his characteristics, like the clicking of the tongue, were based on a guy that Quaid knew from his Texas Youth. Quaid got his start in 1971 with The Last Picture Show and followed that with an academy award-nominated role in 1973’s The Last Detail. He took home an Emmy in 1987 for his portrayal of U.S. President Lyndon Johnson in LBJ: The Early Years.

Brother of actor Dennis Quaid, he has always stood out playing some truly wacky types, from Cousin Eddie to his Alien-believing fighter pilot in the 1997’s blockbuster, Independence Day. In recent years, though, he’s had some run-ins with the law. He and his wife were arrested on multiple occasions for crimes like fraud, burglary, and even deportation after seeking asylum in Canada. He hadn’t acted since 2009 until 2018 with a film called All You Can Eat. Today at 70 years old, he and his wife have apparently made a permanent home in Vermont. But we shall see.

Cousin Catherine proves there is someone out there for everyone. The Chicago Second City alum is no stranger to comedy and got her start as a regular cast member on The Tim Conway Show. But many will recognize her voice alone, as Grandma Longneck in The Land Before Time franchise.

She also had a nice recurring role on the 2005 sitcom, Grounded For Life as ‘Sister Helen’. In her late 60’s, She has been keeping very busy, both acting and voice acting regularly. Most recently, in an episode of the popular CBS sitcom, Mom.

Clark Sr. is a sweet father and grandfather for the family, always proud of Clark. Randolph was a gifted stage and screen actor, who although served in the Air Force in WWII, was also blacklisted from Hollywood in the 40s and 50s.

Thankfully that didn’t last forever, because he gave us incredible performances like co-starring with Pacino in 1973’s Serpico. Randolph passed away in 2004 at age 88 but was acting up until the previous year. What a professional.

Nora was the loving mother of Clark, who excellently played dead when the family was attacked by the killer squirrel. Ladd is a powerhouse actor, nominated for three Oscars, first in 1975 for Alice Doesn’t Live Here Anymore, then in 1991 for Wild at Heart, and the following year once again for Rambling Rose.

Today she is 85 years old and still very much at it, She currently starring in the Hallmark Channel series Chesapeake Shores.

The intimidating and gruff ‘Art’, was tough on Clark, but heck, that’s an in-laws job, isn’t it?  Marshall had quite a career, widely known as the lawyer, Lawrence Preston, on hit ‘60s show, The Defenders.

Not just a TV star, Marshall was also Juror #4 in the legendary courtroom drama, 12 Angry Men.  He died at 84 years old in 1998 from lung cancer.

Ellen’s mother, Francis, was a perfect addition to this all-star cast. with a career that spanned 6 decades, she is best known as the hilarious ‘Marie’, from Everybody Loves Raymond.  Another standout tv role was in the 80s Pierce Brosnan led show, Remington Steele.

Doris passed away at 90 years old in 2016, but we will forever remember her in her massive body of work.

Wow, what a cast. And we didn’t even get to the too-cool for school neighbors, played by the incredible, Julia Louis Dreifus. But do you know who played the male counterpart? None other than Christopher Guest’s younger brother. Nicholas Guest. These two were perfect, and we actually kinda felt bad for them, and for their carpet.

What’s your favorite part of this hilarious holiday classic? Do you like any of the other National Lampoon films? Who was your favorite character? I have to say, my favorite is Aunt Bethany, who couldn’t hear a dump truck driving through a nitroglycerin plant. Let us know in the comments, we read them all.