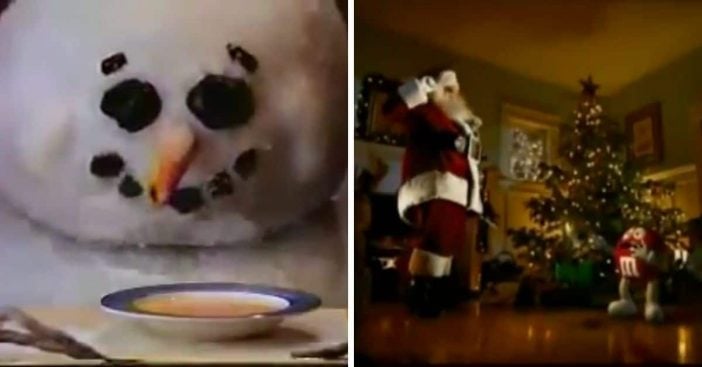 It’s that time of year already. Christmas ads are in full swing as we gear up for another holiday season. It’s hard to deny that consumerism is a part of Christmas, but somehow the thought and effort that goes into commercials around the holidays put a little more meaning into these ads.

Although there are some great Christmas commercials around today, we can’t help but think back to our favorite nostalgic ads. Whether it’s breakfast cereal, candy, or coffee, these classic brands came up with genius ways to sell their product and spread holiday cheer.

This 1987 Folger’s commercial combines the best elements of Christmas into a clever coffee ad. Peter comes home for Christmas bearing gifts and is greeted by his excited younger brother. Together with the two brew a hot pot of coffee to wake up the rest of the family on Christmas morning.

The little girl in this commercial is just too adorable. In a clever ad for America’s Dairy Farmer’s, she excitedly rushes to show her parents the haul Santa left this year – a massive amount of presents and even a car parked right in the living room. “Whoa, those must have been some cookies you left Santa,” says the dad. “I didn’t leave him cookies, I left him cheese,” says the little girl.

Everyone loves M&M’s and the Red and Yellow characters that have been featured in their advertisements for decades. In this 1996 holiday commercial, Red and Yellow are surprised to meet Santa, and he’s just as shocked to see them!

This adorable Nabisco Oreo’s ad from the 80’s features a little boy setting out milk and cookies and waiting late at night for Santa to arrive. Complete with a catchy jingle, Santa arrives and eats the Oreo cookies just as the little boy falls asleep.

Of course Buzz the Bee would want to spread some holiday cheer. In this Honey Nut Cheerios commercial from 1989, Buzz offers the iconic cereal to grumpy Mr. Scrooge and ends up bringing a smile to the old codger’s face.

Although this commercial is a little less “classic” as it was made in 2005, the Coca Cola Polar Bears have been around for decades. In this adorable Christmas ad, a baby polar bear slides into a penguin’s Christmas party and is invited to join in the festivities. The commercial is complete with the song “Little Saint Nick” to really get the party going.

This classic Budweiser commercial from 1987 is the wholesome content we need this holiday season. Sure it’s still an ad, but rather than blasting its product across the screen, the commercial took a moment to show a beautiful snowy town. And the Clydesdale horses look a lot like reindeer.

We love this ad for its simplicity and ability to make Cambell’s Soup look M’m! M’m! Good! A shivering snowman comes in from the cold to enjoy a bowl of Cambell’s Soup. As the soup melts the cold away, a boy is revealed underneath!

Hershey’s “We Wish You A Merry Christmas”

Hershey’s Kisses holiday commercial has been the same for over 30 years. The bell-shaped Hershey’s Kisses appear on the screen and chime to the tune of, “We Wish You A Merry Christmas.” Recently Hershey’s changed things up by releasing a new ad, and people had mixed feelings about it.

Hallmark also created an ad involving an older brother coming home for Christmas, and for good reason. The holidays are a time when everyone hopes to be together with their family. In this heartwarming Hallmark commercial from the 90s, a boy remembers the Christmas when his older brother was away in Europe and sent him a card with some exciting news.

Click for next Article
Previous article: The Story Of Tab – The Once Popular Drink That Will Soon No Longer Exist
Next Post: ‘Little House On The Prairie’: No Sisterly Love Between These Two Clashing Actresses