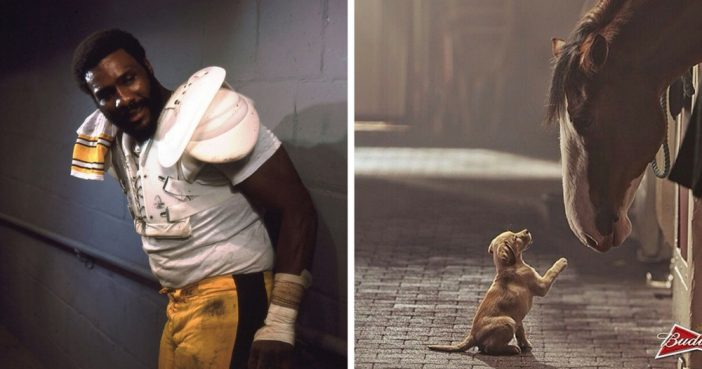 For many, the Super Bowl means epic shootouts, defensive shutdowns and last-minute, game-on-the-line Hail Marys. For others, it’s all about another skirmish: The Battle of the Brands.

Every year, companies spend millions of dollars for just a few seconds of airtime in hopes of getting consumers attention—and then, maybe, their money. Whether funny, sad, self-referential or downright weird, Super Bowl ads have become a spectacle and tradition in their own right.

How did the commercial sideshow become as engrossing as the main event? Between the first Super Bowl in 1967 and through the mid-80s, Super Bowl commercials were generally repeats. It was Apple’s iconic 1984 commercial that turned them into a bespoke phenomenon, after which more brands started to create ads specifically for the big game.

Not that the playbook for a successful Super Bowl ad hasn’t changed. While they were once top-secret, many companies today pre-launch their ads online, or post “teasers,” to drum up attention. The average cost to air a 30-second Super Bowl spot is now $5 million, while it costs essentially nothing to upload a video to YouTube. (Of course, that excludes the cost of creating the ad itself which can range from tens of thousands of dollars to many, many millions.)

Is television in danger of pricing itself out? Analysts say not anytime soon. “The Super Bowl is still the biggest marketing event of the year in this country, by far,” says Tim Calkins, a professor of marketing and creator of the Kellogg Super Bowl Advertising Review at the Kellogg School of Management at Northwestern University in Chicago. “The Super Bowl is more and more unique, as media is fragmenting, and there are more and more media properties vying for people’s attention.” In other words, there may be more and more places to see ads (of all kinds), but fewer and fewer places where a mass audience can see the same ads all at once.

Roughly 112 million people watched the Super Bowl last year, despite the NFL’s ratings decline overall. A similar number are expected to tune in to this year’s contest, between the New England Patriots and the Atlanta Falcons. The ads will be there. Ahead of the game, TIME ranked the most influential Super Bowl ads ever. The list—which is ordered by influence—was assembled and deliberated on at (extreme) length by TIME’s entertainment, culture and business staff.

For viewers tuning in to watch the ’49ers take on the Bengals back in Super Bowl XXIII, there was a nice surprise awaiting them (even more surprising than the Bengals making the Super Bowl): the Bud Bowl! What remains a cultural icon, with branding still showing up all over the internet and in print media, Bud Bowl began as a fun way to watch some stop-motion beer go head-to-head, in the ultimate battle to determine which was superior: Bud Light or Budweiser.

The ad opens with the last play of the 3rd quarter and even takes a fade-to-black break in-between quarters, before returning to a giant hand grabbing a couple beers out the fridge, bringing the game to a surprising conclusion. Who won? The thirsty viewer did, that’s who.

This 1992 ad capitalized on supermodel Cindy Crawford’s sex appeal while subverting viewers’ expectations by revealing the focus to be on Pepsi’s newly redesigned can—and not on Crawford (exactly). This year marks the ad’s 25th anniversary, and still, it endures as a classic pairing of star power and marketing with a not-quite-unwholesome twist.

Snickers’ 2010 ad spot featuring an 88-year-old Betty White laid the framework for the candy brand’s now-familiar “You’re not you when you’re hungry” campaign while becoming a viral hit in its own right. The popularity of the commercial was a testament to the five-time Emmy winner’s enduring charisma as an actress. That was only further confirmed by White’s career revival following the ad spot, included a hosting gig on Saturday Night Live and a return to the small screen with Hot in Cleveland. The Snickers campaign, meanwhile, has since featured stars like Liza Minnelli and the late Robin Williams.

By playing off the famous rivalry between Michael Jordan and Larry Bird, “The Showdown” popularized the now-iconic basketball saying “nothing but net” in the middle of the biggest football game of the year. The catchphrase has become one of the most recognizable phrases in the sports world, permeating other pop culture arenas. Remakes and parodies of the original ad—including a 2010 Super Bowl spot staring LeBron James and Dwight Howard—have been cropping up ever since

Women make up the majority of consumers, commanding a whopping 70% to 80% of all consumer purchases. So why aren’t more advertisements made to resonate with them? That’s in part why Always’ 2015 ad for feminine care projects stole the show during a night dominated by displays of hyper-masculinity. By recasting the phrase “like a girl,” the spot made an emotional appeal for women to empower themselves, especially when it came to sports.

Join Always in our epic battle to keep girls’ confidence high during puberty and beyond. Using #LikeAGirl as an insult is a hard knock against any adolescent girl. And since the rest of puberty’s really no picnic either, it’s easy to see what a huge impact it can have on a girl’s self-confidence. Making a start by showing them that doing things #LikeAGirl is an awesome thing! “In my work as a documentarian, I have witnessed the confidence crisis among girls and the negative impact of stereotypes first-hand,” said Lauren Greenfield, filmmaker, and director of the #LikeAGirl video. “When the words ‘like a girl’ are used to mean something bad, it is profoundly disempowering. I am proud to partner with Always to shed light on how this simple phrase can have a significant and long-lasting impact on girls and women. I am excited to be a part of the movement to redefine ‘like a girl’ into a positive affirmation.” So tell us… what do YOU do #LikeAGirl? For the past 30 years, Always has been empowering girls globally, bringing puberty education to millions of adolescent girls.