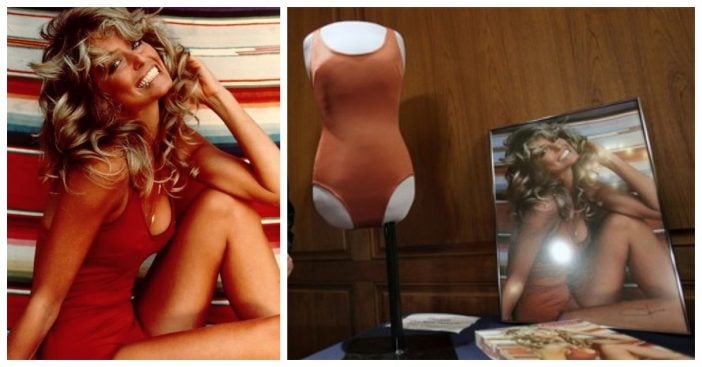 A poster of Farrah Fawcett in her classic, sexy red swimsuit was the poster seen on every teenage boy’s wall in the 1970s. According to The Smithsonian, it is the highest-selling poster of all time with millions of copies sold to this day. Fawcett just had the smile and the bod to drive everyone crazy!

However, Fawcett almost didn’t get to wear that classic, red swimsuit that we all collectively recognize to this day. The poster company behind the iconic photo originally didn’t want Fawcett wearing that suit. Charlie’s Angels had not yet debuted on ABC, meaning Fawcett wasn’t very well known at this point, and they thought the best way to sell their posters was through a racy shot. They originally wanted her in a bikini, but she stated that she didn’t have one. So, she just put on what she had; a hot, little red one-piece swimsuit.

The Secrets to Success, it was all Farrah’s Idea!

In actuality, the entire photoshoot was Fawcett’s idea. Her bathing suit, her hair, her makeup. She made it all her own and she made a hell of a lot of money for herself and the company. Through the decades, this photo has become a staple in vintage photo/poster history. Bruce McBroom, the photographer of the shoot, recalled why he thinks the photo has done so well over the years and why it is so iconic.

“Why it was so iconic I don’t know. If you think back, no one knew who Farrah Fawcett was. Charlie’s Angels didn’t come out until six months later. But this poster came out and sold millions of copies,” McBroom said, “I think the reason it was such a success is that Farrah had such a fresh face. She was the girl next door. So if you were a teenager, you could bring this in the house and put it up in your room — as long as Mom didn’t look too closely.”

The iconic, red swimsuit that made all teenage boys drool and teenage girls jealous was donated to The Smithsonian in 2011 by Ryan O’Neil. Fawcett had apparently wanted to donate the swimsuit all along before her untimely death in 2009.

“It’s an honor to see Farrah’s famous red bathing suit donated to the Smithsonian Institution, celebrating her place in pop culture,” said O’Neal of the suit, “The swimsuit is exactly where it belongs, and I know Farrah is looking down on us today flashing that big smile that we all loved.”

It is evident that Farrah Fawcett made a huge, lasting impression on American pop culture and we miss her today more than ever. That beautiful photo and stunning smile will always be remembered across the nation.

Be sure to SHARE this article if you remember this legendary Farrah Fawcett photo! Don’t forget to check out the video below of the history of the red swimsuit and it’s implementation to The Smithsonian Institution.