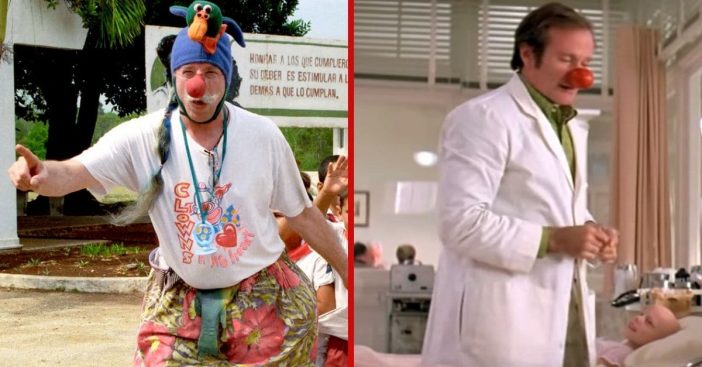 Some of the best plots take inspiration from real life. Admittedly, some truths ring more incredible than fiction. Such was the case when Robin Williams played the titular clownish doctor in Patch Adams. So, who was the real individual whose life the movie took inspiration from?

The 1998 biographical film Patch Adams stars Robin Williams as Hunter Adams. When the film opens, Adams isn’t a doctor; in fact, he’s suicidal and receives treatment at a mental institution. But while there, Adams believes humor proves a better cure than the psychotherapy methods doctors use. So, he pursues a medical degree…while causing a stir, of course. At the heart of his criticisms is the impersonal, “soulless” nature of medical care. he asserts that such a field needs heart and personality and fun. Against all odds, Adams makes it so the world can see the value in his approach.

The story of Dr. Patch Adams: “You make revolution”

Some of the real Patch Adams’s story parallels what’s presented in the movie of the same name. Adams faced suicidal thoughts in his early years. This came about from bullying. His family actually returned from overseas when his father died. Upon their return, institutional hardships made his younger years difficult. And without any established outlet or support base, Adams felt miserable. He ended up hospitalized three times in one year, and after the third time, he told himself, “you don’t kill yourself, stupid; you make revolution.”

Similar to the Williams version, Adams began his medical practice a bit before actually earning his true degree. His life also included one harrowing similarity depicted in the movie, albeit with one difference. One of Adams’s friends was murdered and that shook him to his core. In the movie, Williams must confront a period where he himself no longer believes in hope for helping humanity. But he eventually came to the same motivated headspace Dr. Adams maintained and redoubled his efforts. For the real Patch Adams, this tragedy taught him that caring for a person’s health meant caring for their entire body and soul and that of their community. By extension, that also required caring for the world.

That’s not to say traditional medicine should be ruled out completely, Adams asserts. Indeed, his base at the Gesundheit! Institute (also known as the Zanies) incorporates traditional and holistic, utilizing the best of both to treat the body and soul of a patient – and they do it entirely for free. Similarly, cinema and reality met when Patch Adams released. And although it did not bring a tidal wave of funds to the hospital, Adams himself writes it increased visibility and “opened many wonderful doors to new directions for Gesundheit to pursue.” Adams further absorbed the field of design – though, not in a way one might expect. Ever a teacher who loves to encourage those in his charge, he took up mastering and teaching medical design. This helps compile regimens for medical practitioners so they too can address a patient’s physical and emotional needs. Then, Adams asserts, they’ll get the best, most full treatment – and so may the community.

And though the movie may not have brought too much in the way of funds, perusing the comment section of a related YouTube video shows it definitely helped spread its message in a way that resonates. One comment from a medical practitioner states, “Every med-student should definitely [sic] watch this movie, ’cause school and university don’t [sic] teach you humanity and sympathy, we need more of that within the medical personnel. I can relate so much with Patch, humor has helped and taught me to deal with my issues, it takes away an immense [sic] amount of the weight and struggle we all deal with in life. Infinite thanks to both Robin and Hunter for inspiring and touching so many souls around the world.”