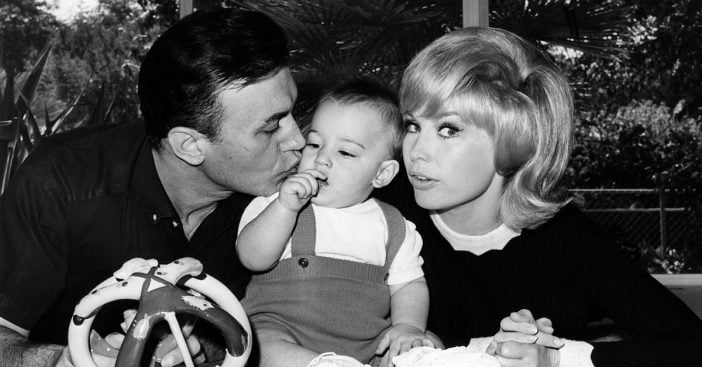 Have you ever seen Barbara Eden attend an event without a smile on her face and the joyful willingness of folding her arms to assume the I Dream of Jeannie position? Or being willing to interact with her fans? There simply aren’t that many stars of Classic TV shows that embrace their legacy as positively as she does — and this despite the fact that she lost her only son, Matthew Michael Ansara, to a drug overdose nearly 20 years ago.

Pop culture historian Geoffrey Mark comments, “I think she’s very confident in herself. She understands the business beautifully, how it works, what one has to do to become a star and then maintain that stardom. She’s enormously hardworking and probably the reason she’s able to do all of that is that she always paid attention to her personal life. Which has not always been happy, but she paid attention to it. She didn’t take it for granted.”

In 1968, about halfway through her run on I Dream of Jeannie, Barbara spoke to Texas’ Abilene Reporter-News and said of doing the show, “The only thing that bothers me is being away from Matthew. There’s so little time to spend with a child when you think of how short a time it is before he grows up. He’ll never be there again, and I just hate every day that I’m not with him to enjoy that age.”

Just two years later after the show had ended, she elaborated on that thought with The Courier of Waterloo, Iowa, explaining that despite the fact she’d been offered new series by the three major networks at the time, “I want to devote myself to my home and my family for a while … It’s so good to be around when Matthew needs me.”

Who is Barbara Eden’s husband?

Barbara fell in love with Michael Ansara, a character actor perhaps best known as Cochise in the 1956 to 1958 Classic TV Western Broken Arrow. They married in 1958 and by the time she had been signed to play Jeannie, she was already pregnant and figured she would be let go from the series. Instead, the producers decided to shoot around her pregnancy.

In 1965 she noted to The La Crosse Tribune of Wisconsin, “I made 11 episodes, riding a camel, flying through the air and everything. I worked until I was seven months along and even then came back for some close-ups at eight months.”

Matthew was born about a month before I Dream of Jeannie premiered, on August 29, 1965. As he grew up, he developed certain resentments towards the show and his mother’s famous character, among them that she missed his second birthday due to an absolute need to work, Then there was the fact that as he got older, he found that he had to share her with the rest of the world. As a result, as Barbara had pointed out, he looked at the Jeannie character in the same way that Candice Bergen looked at Charlie McCarthy, the ventriloquist dummy that was partnered with her father, Edgar Bergen — and it was decidedly not good.

By 1971, with Jeannie over and Michael Ansara struggling for work, the joy that Barbara was pregnant again was tempered by the reality that she nonetheless had to keep working. As a result, she got involved in touring companies of The Unsinkable Molly Brown and The Sound of Music, which were physically exhausting. Seven months pregnant by the time it was all over and she had returned home, there were complications and the child was stillborn.

All of that — coupled with severe postpartum depression — resulted in the collapse of the marriage, precipitated in no small way by the guilt that Barbara felt. As she writes in her autobiography Jeannie Out of the Bottle, “I was stifling the thought that if I’d stayed home during my pregnancy, perhaps the baby could have survived. I’ve heard a tragedy can bring a couple together, but the death of our second son hurt our relationship beyond repair.”

Barbara and Michael divorced in 1974 and three years later, when she was marrying Chicago Sun-Times executive Charles Donald Fegert, Matthew couldn’t bear it and went off to live with his father. When that marriage, too, ended (in 1982), he moved back in with his mother. Looking for direction, Matthew said that he wanted to explore the idea of acting, which neither of his parents thought was a good idea, though advice to the contrary came from a surprising place.

While promoting the 1989 TV movie Your Mother Wears Combat Boots, which, as it turns out, had mother and son acting together, she spoke to The Gazette of Cedar Rapids, Iowa, relating, “We’d always discouraged him from acting and then I had dinner with George Burns and he said, ‘How’s the kid?’ So I started to explain and he said, ‘He wants to be an actor, huh? You didn’t discourage him, did you?’ I said, ‘He needs to study in college’ and he said, ‘Well, the profession has been good to you, hasn’t it?'” That did the trick, though Matthew only scored a few roles over the years.

Nonetheless, for Barbara, all of this felt like something of a return to normalcy. Sadly, it was as much of an illusion as any of Jeannie’s magic.

By 1984, Barbara had noticed changes in Matthew in the sense that he was losing weight, seemed lethargic, was developing a temper, and oversleeping. Under the impression that he was attending Valley College, she realized one day that he’d left his books behind. She drove to the college and headed to the registrar to find out what class he was in, and was told that he wasn’t even a student there. A later confrontation resulted in Matthew leaving the house and Barbara, having called Michael, beginning to search for him. For several months, they never heard anything, though eventually, they discovered that he had spent much of that time living on the streets.

Barbara, who would marry for a third time to architect and real estate developer Jon Eicholtz in 1991, conveyed to People, “Matthew never told Mike and me that he was using heroin; he didn’t want to hurt us. But we figured it out, because [of all the changes]. I insisted he enter a rehab center and I left him, come back home when he came out a month later. But he started using again.”

Taking the advice of professionals, she had no choice but to initiate tough love and lock him out of her life until he’d gotten the help he so desperately needed. Rehab became a revolving door for him over the next 14 years until things reached a point where he seemed to have turned a corner in his addiction.

“At 27,” she related, “he fell in love with a wonderful woman, an accountant, and they had [plans for] a big, fancy wedding in Oregon. For a year he did well. He had a job and studied creative writing at UCLA. But then the cycle began again and he went back on heroin. She left him — wisely. He blamed her, which isn’t surprising. A drug addict never takes responsibility for his own actions.”

What Year did Matthew Ansara die?

On June June 27, 2001, the Associated Press reported that on the previous day, “The body-builder son of actress Barbara Eden and character actor Michael Ansara was found dead in his car, but it will take an autopsy to determine the cause, authorities said. Matthew Michael Ansara, 35, a fitness buff and aspiring actor, was found at a gas station in Monrovia, about 10 miles east of downtown Los Angeles, said Scott Carrier, spokesman for the Los Angeles County Coroner’s Office.”

As it turns out, police found vials of anabolic steroids — which he’d been taking to get ready for an upcoming bodybuilding competition. Blood work would eventually reveal a high level of heroin in his system as well. Years later, Barbara would tell Entertainment Tonight, “I was shocked when I got the call, because he had been clean and sober for almost two years and was going to get married. We had the parties for the marriage arranged and everything.”

The death of Matthew left Barbara wondering why had turned to drugs in the first place. She came to believe that it could be traced back to the divorce between her and Michael. “Matthew took it horribly,” she told People. “He wanted his mommy and daddy to stay together. If I had to do it over, I would have waited until he was older. But then I remind myself that so many kids from divorced homes don’t become addicts.”

Barbara had one of two choices she could make: collapse under the weight of the tragedy or find the strength to push herself forward. She chose the latter, writing in her autobiography, “I have put one foot in front of the other and carried on as best I could. I’ve often been asked how anyone can cope with losing a child. You don’t. You can’t. You don’t know how you will get through it, how you can survive, but you just do. There’s no other choice.”

And Barbara Eden seems to have proven that every single day since. “She had a child that she unfortunately lost to a drug overdose — what do you say about that?” muses Geoffrey Mark. “When someone loses a child to an overdose, it’s a double-whammy, because no parent should ever lose a child for any reason. But when you lose it to drugs, there’s always that feeling, ‘This could have been prevented.’ Yet one never feels that she’s bringing that pain with her to you or that she’s feeling sorry for herself.”

Herbie J Pilato, author of Glamour, Gidgets and the Girl Next Door: Television’s Iconic Women from the 50s, 60s and 70s, says, “To this day, she remains very kind and loves her fans. She just fully embraced the whole Hollywood thing and didn’t fly by the seat of her pants on no talent. Certainly she’s had her traumas — my gosh, she loses her son — but while she grieved, she didn’t retreat. I’m sure there’s not a day that goes by that she doesn’t think about him, but she’s managed to keep moving forward.”

Ed Robertson, host of the TV Confidential classic television podcast, comments, “Barbara Eden has been such a public persona, despite overcoming the tragic death of her son. In a way, I think that probably adds to her appeal, though I don’t think she would say that. But the truth is, she works, she does public appearances and she engages with her fans despite the fact that this terrible thing happened. And in a way — not that she isn’t human — but that actually adds an element of humanity to her. And I think that’s part of her enduring appeal.”