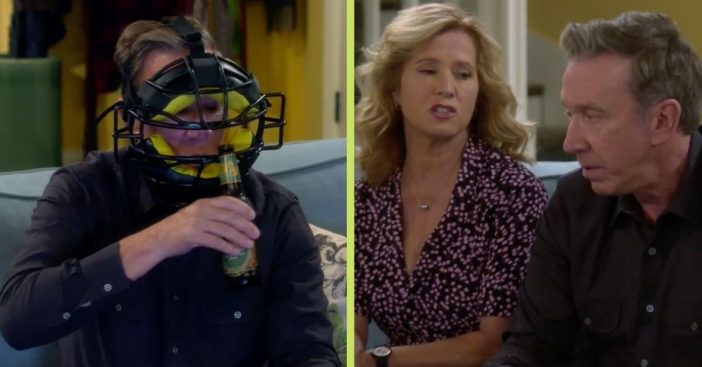 In a new clip posted to the official Last Man Standing social media account, we see a new clip from the 9th and final season of the show. In the clip, Tim Allen’s Mike Baxter is wearing an umpire’s mask while trying to drink a beer. That’s when his wife Vanessa Baxter walks in and tells him that it doesn’t count as an actual mask in the age of the coronavirus.

The caption for the video clip reads “Are you sure…? Tim Allen is back for the final season of #LastManStanding this January on @foxtv.”

In addition to this clip, the official social media for the show has been posting other clips as well to give fans a glimpse into what they can expect for the last season. In one video, Mike and his wife talk about the NFL ratings, she asks him if Tom Brady and Drew Brees are retiring this football season. Mike responds that they haven’t announced it yet. His wife then goes on to ask if ratings would increase due to the “ageless wonders” retiring.

In a The Office like fashion, they both turn to look at the camera, breaking the fourth wall, and seemingly referencing their own show’s ratings during the previous season. What could this clip mean about NFL ratings by the time the show airs?

Hmm… what could they possibly be alluding to? Anyways, the final season of #LastManStanding is this January on @foxtv.

The final season of Last Man Standing will premiere in January 2021 on FOX. Will you be watching?