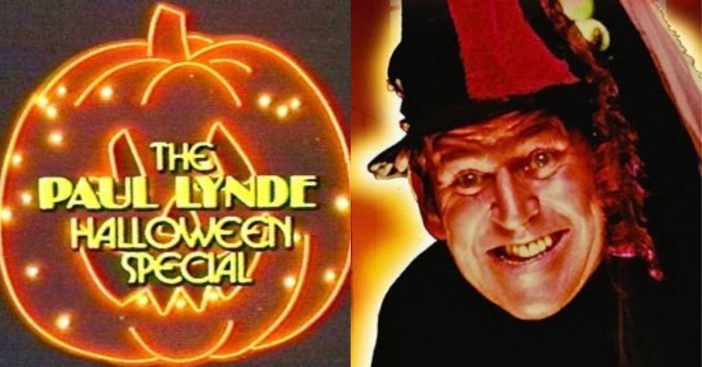 When it came to the late comedian — and Bewitched star — Paul Lynde, back in the 1970s ABC knew that they had lightning, they just could figure out what sort of bottle to put it in. Eventually, they realized that it would be in the form of comedy specials, the most popular of which was 1976’s The Paul Lynde Halloween Special.

“It’s been called zany, scary, strange, kooky and a train wreck, yet some, like me, make it a must-see every Halloween,” says Cathy Rudolph, Paul’s friend and author of Paul Lynde A Biography — His Life, His Love(s) and His Laughter. “At the same time, it’s clean, family fun. Paul truly enjoyed doing variety shows, as he did in New Faces 52 — where he first got noticed but did not make it to fame till nine years after that.

“Ronnie Graham,” she adds, “was in New Faces of 52 with Paul and he was also one of the writers for the Halloween Special along with Bruce Vilanch and some others. This special had a similar format to the popular Broadway New Faces, with singing, dancing, skits and jokes: ‘There’s a real scary holiday coming up,’ the host says. ‘Election Day!’ I loved that line then and maybe it’s even truer now.”

‘He deserved a live audience’

Observes Herbie J Pilato, author of Twitch Upon a Star and The Essential Elizabeth Montgomery, “The Paul Lynde Halloween Special is not exactly one of the best television specials of all time. It was produced at a time when TV specials like that were not using live audiences and mostly only dreadful laugh-tracks. Certainly, Paul was a terrific performer on screen, whether for television or film, and like many of his generation he came from the stage. Any opportunity to perform in front of a live audience was a welcome opportunity for him and a talent such as his shined in front of one. But he wasn’t given that chance with The Paul Lynde Halloween Special. He deserved more. He deserved an audience. But just the fact that he was in that special or headlining it makes it special, audience or not. In this particular case, Paul was better than the material, and he made the material better, too, with that unique line-delivery of his.”

Bruce Vilanch, one of the writers for the special who, around the same time, worked on Donny & Marie, The Brady Bunch Hour and the infamous Star Wars Holiday Special, notes that Paul, who had, of course, been the center square on The Hollywood Squares and a regular on Donny & Marie, had a “gigantic” deal at ABC.

“He had done a sitcom called The Paul Lynde Show [currently airing on the AntennaTV network] that had one of the biggest opening numbers ever,” Bruce explains. “I mean, the ratings were huge. But the first week, people hated the show, the second week the ratings were like a big old atomic bomb. That was probably because Paul was best taken as a flavor in a recipe. You’d bring Paul in, he’d do one line and just kill with that one line. But he was not the central character in a show. They tried a second time with a show called Temperatures Rising; they put him in as the star and called it The New Temperatures Rising. Again, another wreck.

“So Paul had to suffer as a multimillionaire utility player, and one of the things they gave him to make him happy was his own special,” he elaborates. “Because it was Paul, it just couldn’t be the Paul Lynde show; that was too nonspecific. But marrying Paul to Halloween seemed like a good idea, because there was something essentially witchy about Paul Lynde.”

Pop culture historian Geoffrey Mark, author of The Lucy Book, muses, “I firmly believe that if Paul had been straight and deemed more acceptable by the network, this special would have been the beginning of Paul breaking out of sitcom work and finally performing to the level of his talent. The special is highly unusual, but it works because it is just that. He turned the Halloween cliches on their ears and came up with a very interesting program.”

The idea the writers came up with was to dress Paul up as a witch — a concept that became part of the advertising campaign. They also created a world in which they brought aboard famous witches to play his sisters, as he was (as it turned out) part of a family of witches. One of them was Margaret Hamilton, most famous for her portrayal of the Wicked Witch of the West in The Wizard of Oz (1939); and Billie Hayes, who had recently played Witchipoo on H.R. Pufnstuf.

“And he was going to visit them,” Bruce explains. “We loaded it with guest stars, like Tim Conway, who was huge off of The Carol Burnett Show; Roz Kelly, who played a character on Happy Days named Pinky Tuscadero, who was Fonzie’s girlfriend; Florence Henderson, because she was a star of The Brady Bunch and was a big ABC star; and Betty White, who was on The Mary Tyler Moore Show at the time. And we also had the rock band KISS; they hadn’t been on primetime television before, but their makeup was perfect for the show.”

Paul Lynde Could Be … Challenging

Cathy points out that Paul was a perfectionist who could become real uptight during rehearsals, though if he relaxed, he could have fun. “Especially if he liked the cast, and he had a stellar one for the Halloween Special,” she opines. “Paul used to tell me how important it was for him to stay in touch with the younger generation, and he drew them in with the band KISS, who sang three hits on the show. Many fans had only heard them on the radio or listened to their albums, but this time they could see them with their unique look, wild makeup, and giant platform boots. Perfect for Halloween. I believe the band has become forever associated with the holiday because of that special.

“I used to call him after every special he did that headlined his name,” she adds, “and I always seemed to be the first call he got after it aired. He sounded happy when I would tell him how much I enjoyed the show and how he performed. But he always said things, like, ‘Well, I hope everyone else liked it, too.’ He was very insecure and, I feel, so underrated.”

In regards to working with Paul — and certainly getting a sense of that insecurity — Bruce summed it up this way: “On one drink, he was hysterical. Two drinks, he was the Nazi High Command; he got very ugly, very fast. I liked him, but you very quickly learned when you needed to have a call and go someplace else. Because he was bitter and unhappy, and it would come out in some very ugly ways. Sober he was kind of dry, not overly happy, and on one glass of wine, he was light and funny. He was a complete pro; he knew what he was doing, but I think he had deep unhappiness because he couldn’t translate his talent into anything more than a flavor. He could be the best friend on screen to Rock Hudson or something, but it just never translated into him carrying a vehicle.

“But the Halloween Special,” Bruce closes, “is fun bad. You have to remember it’s of its time and it was one of those things that was loaded and crazy. And, of course, with Paul at the helm, we could load it up with insanity and they liked that; it’s what they wanted. They wanted KISS and Florence Henderson on the same show [laughs]. The thing is, Paul died in 1981 and if he knew that we were still talking about him in 2020, he would be stunned. Just amazed.”

The Paul Lynde Halloween Special is available on DVD and on Amazon Prime.