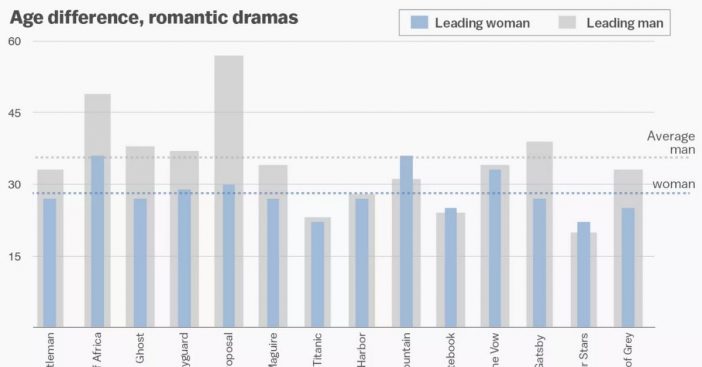 A new study has found that women over the age of 50 in film are often relegated to supporting roles instead of leading roles. The Ageless Test study was released in partnership with the Geena Davis Institute on Gender in Media at Mount Saint Mary’s University. The study reveals that only 1 in 4 films passed what they call the Ageless Test.

The test explores women over 50 and how they are presented as having fully lived their lives “rather than serving as scenery in younger people’s stories,” according to the study. In order to pass the ageless test, the film would need “at least one female character who is 50+ who matters and is tied into the plot in such a way that their removal would have significant effect” and “the character must be presented in humanizing ways and not reduce to ageist stereotypes.”

Women over 50 in film in romantic dramas

The study explored 2019’s top-grossing films from the U.S., U.K., France, and Germany. What they found was that no women over 50 were cast in leading roles in any of these top-grossing 2019 films. However, two men over 50 were featured as leads. However, when women were cast in any role, they were placed in a stereotypical role (stubborn, 33%; unattractive, 17%; grumpy, 32%; unfashionable, 18%).

Actress Davis weighs in on these finds: “Given that adults 50+ are 20% of our global population, we need to not only include diverse adults 50+ in our stories, but also show them having full lives in order to de-stigmatize the stereotypes around aging.”

The study also finds that females make up only 25% of characters over 50 compared to 75% of males. “Ageism is pervasive in this industry,” Jessica Lange tells AARP Magazine in 2017. “It’s not a level playing field. You don’t often see women in their 60s playing romantic leads, yet you will see men in their 60s playing romantic leads with co-stars who are decades younger. I think about how few wonderful actresses of my generation are still doing viable, important film work. You go to television. You go to the stage. You do whatever you can because you want to keep working.”

In terms of an elder romance, those are also nowhere to be found. They find that characters under 50 are “three times more likely” to be featured in a sex scene. This “sends the message that older bodies are not as worthy to be shown in a sexual way.” The study concludes by calling for more inclusivity and diversity regarding age and women in film.