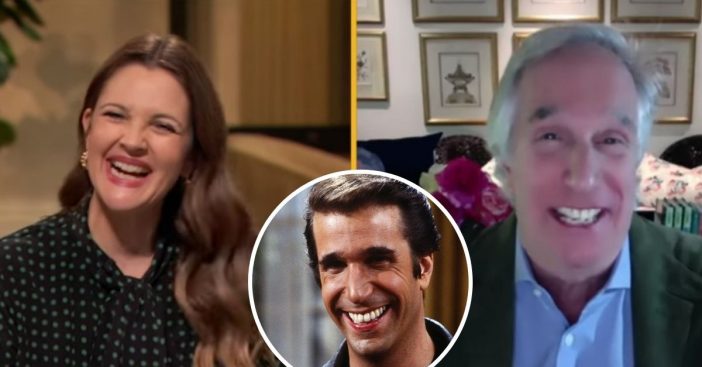 Drew Barrymore recently had Henry Winkler as a virtual guest on her new talk show. She expressed her gratitude that Henry’s Happy Days character The Fonz taught her a valuable lesson when she was younger.

She said, “I wish I was there to give you a hug because when I met you when I was young, you actually changed my life forever because The Fonze — the most important man on the planet — was nice. I was like, ‘Then everybody has to be nice because The Fonze is nice.'”

The actress said she has used this lesson her entire life. She thought it was the “marching order of life” to be kind to everyone. Henry was so touched by what Drew said. He actually admitted it was one of the “most wonderful compliments” he has ever received.

RELATED: The Fonz Still Teaches Us Today On How To Let Go Of Problems And Move On

Henry continued, “I never think of being nice, I think of being grateful. I think that I am so happy that I get to do what I dreamt of doing and it has grown over the years.” Henry and Drew then talked about getting older and some very important ages.

Henry said he got the role of The Fonz on his 27th birthday then his role on Barry on his 72nd birthday! Now, Henry is about to turn 75 years old. He joked that he doesn’t feel that old, but his knees certain do.

He shared the reason he puts kindness first

Henry also talked about his experience on The Mary Tyler Moore Show, which helped him to truly be kind to everyone during his long career. He said, “The first time, when I came from New York to Hollywood, the first job I had, I had four lines on ‘The Mary Tyler Moore Show,’ which was the ‘Friends’ of its time. They said, ‘Lunch,’ and all these big stars, they all went to lunch, and I just was in the middle of the soundstage and I had no idea where to go, no one had told me. I felt really alone.”

He continued, “I swore I would never let anybody on a set I was on feel that way ever again. No matter what show I do, if there is a guest, I take that guest, man or woman, by the hand and show them where they can get anything done during the day.

In conclusion, watch the interview below:

Click for next Article
Previous article: The Bond Between Ma And Pa Walton Was Real Between Ralph Waite And Michael Learned
Next Post: The ‘Little House’ Episode “Sylvia” Is Straight Out Of The ’80s Slasher Horror Craze