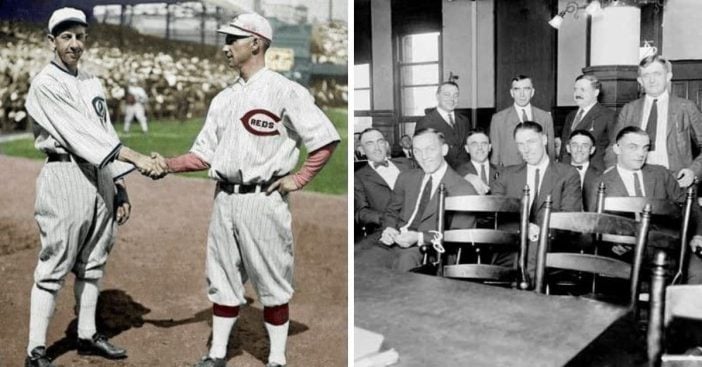 In the early 20th century, corruption in American baseball was not in short supply. But the idea that the entire World Series could be completely fixed was an alarming one. Then in 1919, the ultimate scandal took place. Eight players from the Chicago White Sox allegedly threw the World Series to their opponents, the Cincinnati Reds.

It’s thought that the scheme started with a meeting between White Sox first baseman C. Arnold “Chick” Gandil and a gambler named Joseph “Sport” Sullivan. Money seemed to be the only logical motivation. White Sox club owner Charles Comiskey was notoriously stingy and known for underpaying his players. Following Gandil’s initial skepticism, he eventually enlisted the help of some of his fellow teammates to throw the series in exchange for a  payout of around $100,000.

Sullivan began to gather his co-conspirators to help fix the game. Initially, the White Sox were highly favored against the Reds, but the odds shifted as rumors of a fix began to circulate. The first game of the Series made it feel almost obvious that at least a few players were on board. Chicago lost 9-1 to Cincinnati, with pitcher Eddie Cicotte making a handful of atrocious blunders.

RELATED: Favorite Part Of Going To A Baseball Game?

The White Sox poor performance continued for the next several games. In 1919 the World Series was the best of nine format, and by October 6 the series stood 4-1 in favor of the Reds. However, the Sox had begun to grow uneasy. Supposedly the conspiring players should have received payments of $20,000 after each loss, but so far the gamblers had failed to deliver.

Perhaps losing interest in the scheme without their payoff, the White Sox won the next two games of the Series. However, the Sox had made a deal with gamblers and criminals and several of the players later hinted that at this point they began to receive threats. For whatever reason, the Sox eventually lost the Series to the Reds in game eight. Suspicions continued to circulate that the game was fixed, although the 1919 World Series went mostly unexamined until August 31, 1920.

When a grand jury convened to investigate a supposedly rigged regular-season game, suspicions quickly turned to last year’s World Series. Around this time, gambler Bill Maharg publicly discussed his own involvement in the fix. As the accusations and suspicions mounted, the Sox players caved to the pressure. Eddie Cicotte, Claude “Lefty” Williams, and Oscar Felsch confessed their involvement in front of a grand jury. Star hitter “Shoeless” Joe Jackson also admitted to accepting $5,000 from his teammates. However, Jackson’s true involvement in the fix remains a point of contention.

In October of 1920, Gandil, Cicotte, Williams, Felsch, and Jackson as well as Charles Risberg, Buck Weaver, and Fred McMullin were indicted on nine counts of conspiracy. However, the case quickly fell apart when the paper accounts of the grand jury confessions mysteriously disappeared. Without solid evidence, the nine players, now known as the Black Sox, were found not guilty on all counts.

Despite avoiding the legal ramifications, the Black Sox were not free from punishment. After their acquittal, baseball’s first commissioner, Judge Kenesaw Mountain Landis, permanently banned all eight Black Sox members from organized baseball. The Black Sox scandal remains one of the biggest sports scandals in history, forever throwing into question the sanctity of America’s past time.