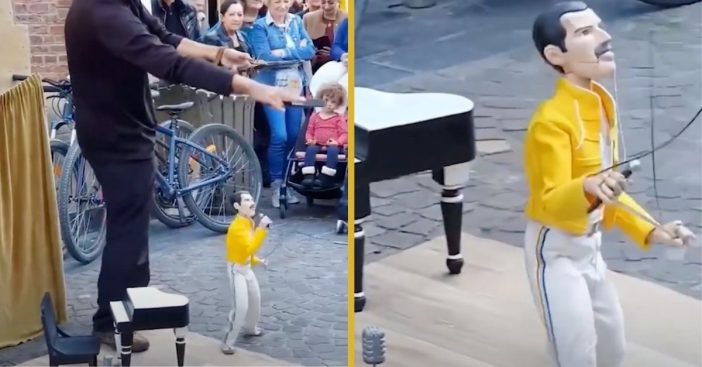 Even if you’re not too fond of puppets, you have to admit this is pretty neat! Someone built a marionette puppet of Freddie Mercury and had it do a street performance with an array of Queen songs. The puppet looks so life-like and real, it’s almost disturbing… disturbingly cool!

As Queen plays in the background, the man behind the puppet strings causes the puppet to move so gracefully, even its mouth, as it sings so realistically. In the video, people crowd the marionette puppet, taking pictures and videos as they watch in awe.

Even the way the puppet moves mimics that of how Mercury would move during his performances. Also present in the crowd were a lot of children, who seemed to take a huge interest in the puppet show. One of the songs included in the performance was “Another One Bites the Dust” in which the man behind the puppet used the marionette to interact with the crowd as well and “sing” to them!

The puppet was holding a mini microphone, and also included in the setup was a mini chair and piano. A lot of people commented on this video with positive feedback about that, as well, saying, “This is amazing puppetry and adorable! The little piano and chair are a cute touch.”

People are absolutely loving the performance!

Another fan says, “I love it. This man is a genius. He has really captured Freddie’s moves and even a playful side of Freddie. The puppet looks identical to Freddie. This man should be on TV.”

Check out the full video below! Let us know what you think of this awesome marionette puppet of Freddie Mercury. We sure do love it! And we feel like the real-life Freddie Mercury would get a kick out of this!

Click for next Article
Previous article: Whatever Happened To Christopher Knight, Peter Brady On ‘The Brady Bunch?’
Next Post: Black Sox: The World Series Scandal That Changed The Game