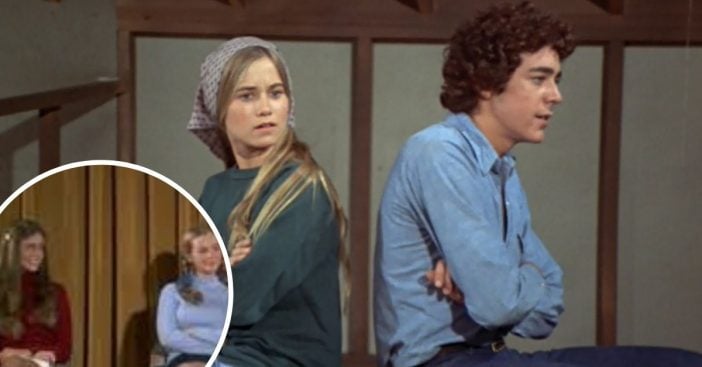 Maureen McCormick and Barry Williams played siblings on The Brady Bunch but off-screen they had crushes on each other. Specifically, during season four, Maureen was hoping something might happen between her and Barry. Maureen admitted that they had a mutual attraction but had been trying to ignore it for years.

The actors flew to Hawaii for a special series of episodes. While in Hawaii, they kissed. Maureen wrote in her memoir, “We couldn’t hold back any longer. It was our first kiss, and it was long, passionate, and deep. It was wonderful, too. As we continued to kiss … a part of me – a tiny part, admittedly – said to myself, ‘Oh my God! I’m kissing my brother. What am I doing?’ I didn’t care. I knew exactly what I was doing.”

When they got back to Los Angeles, their feelings grew. However, they were expected to play siblings on the show and that meant they may have a romance on the show with guest stars. There was one episode that featured guest stars that Maureen got really jealous of. Actress Tannis Montgomery and Rita Wilson starred in the episode “Greg’s Triangle.”

Both women guest-starred as Greg’s love interests. Naturally, this made Maureen jealous! She admitted they were on again off again because they were both too young to want to commit. Barry was also beloved by many girls so he didn’t want to tie himself down.

While they did date on and off, they never committed to a relationship. Maureen went on to marry Michael Cummings in 1985 and Barry has been married three times over the years. He is now married to Tina Mahina. Even though Maureen and Barry’s dating relationship never worked out, they are still friends to this day. At least it didn’t make things too awkward, especially while reuniting last year on A Very Brady Renovation.

Click for next Article
Previous article: The Mystery Of The Great Escape From Alcatraz: Did They Survive After All?
Next Post: How Cigarette Culture Is Today Compared To The Smokiness Of The ’60s