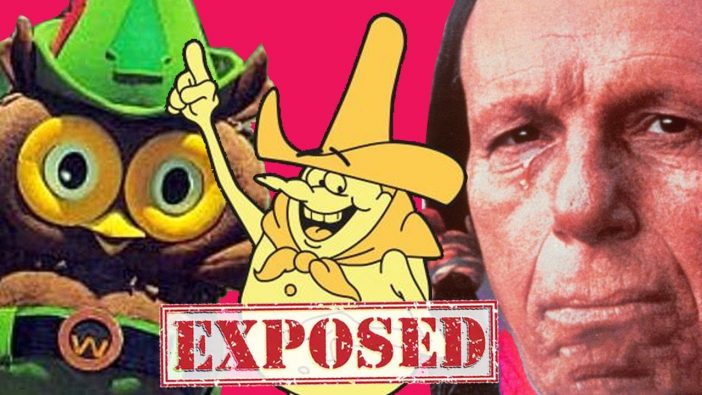 Not all colorful characters in commercials between Saturday morning cartoons are meant to sell you something for a profit. Some Public Service Announcements, also known as PSA’s, have brought us cherished and timeless American icons, others have faded into obscurity and you probably forgot about them. These characters reminded us to eat better, preserve our earth, how to prevent crime, and even how to survive a nuclear bomb.

Today we are counting down the strange but lovable characters from classic PSA’s. Do you remember any of these?

Timer is a cartoon character that is best known for reminding kids watching Saturday morning cartoons to remember to listen to their bodies.  He seems to be a skinny-limbed ball-shaped being with a fondness for stylish hats and bow ties. Although the segments never actually had official titles they are often referred to by their unique memorable catchphrases. “Hanker for a hunk of cheese” was probably the most popular. This short reminded kids to eat cheese and cracker sandwiches to tide themselves over before dinner. If pretty much anything happens to Timer, he hankers for a hunk of cheese.

He even made an appearance in an episode of Family Guy, as “the hunk of cheese guy.”
In 1973, Timer made his first appearance in a made-for-TV 45-minute afternoon special The Incredible, Indelible, Magical, Physical, Mystery Trip. In this movie, Timer guides a young brother and sister through a microscopic journey through the body of their Uncle Carl. The shorts continued to air during Saturday morning cartoons on ABC all the way up until 1998, teaching kids timeless and valuable lessons like “you are what you eat.”

At this point Smokey the Bear is more than a PSA, he’s a cultural icon. You see, Smokey the Bear is the longest-running ad campaign in American history originating all the way back in 1944. His original slogan was “Smokey Says – Care Will Prevent 9 out of 10 Forest Fires” but in 1947 it was changed to the more well known “only you can prevent forest fires.” In 2001, it was actually changed again to “only you can prevent wildfires” to include fires that started in other places like grasslands and to exclude prescribed burning practices.

Back In 1942, the U.S. Forest Service established a program meant to prevent unintentional forest fires with public outreach. At this time, the great Walt Disney himself allowed his characters to appear in fire prevention public service campaigns. However, Bambi was only loaned to the government program for a year, so after that year was up, the forest service needed a new symbol. That new symbol was, you guessed it, Smokey the Bear. Interestingly enough his name was inspired by “Smokey” Joe Martin, a New York City Fire Department hero who was badly burned and ended up going blind from a daring rescue in 1922.

Smokey the Bear is the longest-running campaign for a reason. He is a cultural phenomenon and has been for decades. He has shown up everywhere from cameos in Disney cartoons to Macy’s Day Parade balloons. He actually had his own cartoon show for a while. Smokey was even parodied in the hugely popular video game, Fortnite.

On Earth Day 1971, the Keep America Beautiful organization launched their campaign officially titled “People Start Pollution. People Can Stop It.” but probably more well known as the “crying Indian.” The ad featured the voice of William Conrad, the same narrator from Rocky and Bullwinkle. The role of the Indian was played by Iron Eyes Cody who is best known for playing Native Americans in Hollywood movies and, of course, this ad.

Although he is actually of Italian descent, Iron Eyes Cody began to take on his roles in real life. He actually dressed in stereotypical cowboy-and-Indian type ways in his private life offset. He began to claim he was actually Native American and in fact a member of many tribes. I guess it worked because he was in over 200 films playing basically the same archetype character. The famous ad centered around a Native American man so devastated by pollution that tears stream from his otherwise stoic face. The ad made an impact on many Americans including Dave Chappelle who referenced the PSA in his legendary stand-up special “For What It’s Worth” in 2004.

Woodsy Owl is the mascot for the United States Forest Service. Woodsy the Owl was created in the early ’70s and he is probably most famous for his yesteryear catchphrase “Give a hoot—don’t pollute!”  However, his current motto is “Lend a hand—care for the land!” I guess caring for the land goes a step beyond simply not polluting but I think I like the original slogan better.

One of the original TV spots introduces Woodsy Owl as Smokey the Bear’s “pal who is always on the prowl.” Thus the U.S Forest Service universe was created. What’s different about Woodsy from Smokey is the importance of the real-life walk-around version. Many of us remember the REAL Woodsy. He was more than a cartoon, he could walk around, move his eyes, and talk. There was no walk-around Smokey the Bear costume until 2014 and even that one never spoke. These days, Woodsy the owl has a new look and costume. Again, I think I like the old one better.

The story of Mr. Yuk is a strange one indeed. You see, Mr. Yuk, was a privately owned and trademarked graphic image but he did end up appearing in a public service announcement. The story goes like this. Mr. Yuk is owned by the Children’s Hospital of Pittsburgh and was created by Richard Moriarty, the founder of the National Poison Center Network. Moriarty felt that the skull and crossbones traditionally associated with hazardous material just didn’t cut it anymore. He thought the symbol had become counter to its purpose because children associated it with good things like pirates and candy instead of bad things like poison. Notably, it was the symbol of his hometown of Pittsburgh’s major league baseball team, the Pittsburgh Pirates, so it was a beloved symbol in Pennsylvania for sure.

Long story short, Pennsylvania Congressman Bill Coyne agreed and they were off to the races.
People from all over were buying the stickers. The only problem was research suggests there was no distinguishable impact from the campaign. I think these guys just got sick of the Pittsburgh Pirates, I wonder how they did in 1971.

Turns out you can teach an old dog new tricks because McGruff the crime dog has been around for ages. McGruff has promoted a variety of causes over the years but his mission remains the same, to take a bite out of crime. McGruff’s first TV appearance was the “Stop a Crime” commercial which debuted in February 1980. The commercial encouraged viewers to light and lock their front door at night. There have been many different versions of McGruff the crime dog, but no matter the decade he’s a veteran canine investigator who’s seen it all. In the late ’90s, viewers were introduced to McGruff’s nephew Scruff McGruff. Scruff McGruff was more focused on relating to kids.

What’s interesting about McGruff the crime dog is despite him being a cartoon dog, the original commercials were not aimed at young children.  Adults are primarily the ones who are concerned about home burglaries. Adults are involved in neighborhood crime watch programs, not young children. That being said the crime-fighting dog was a huge success. Independent Studies showed that not only were most Americans familiar with the crime dog but they liked him. To this day police buy McGruff costumes for community outreach.

Bert the turtle is the lovable little star of a horrifying film about nuclear bombs known as “Duck and Cover.” The video starts with a very catchy jingle explaining that Bert never got hurt. Why did he never get hurt? Because he would, you guessed it, duck and cover. Bert avoids a monkey with dynamite using this practical maneuver.

But the real scary part is when Bert disappears and the narrator takes over. The ominous voice gives a detailed guide on how to survive a nuclear bomb with the best duck and cover strategies for pretty much every imaginable location. Millions of school children in the ’50s saw Bert the Turtle and were no doubt scared to death every time they saw a flash.