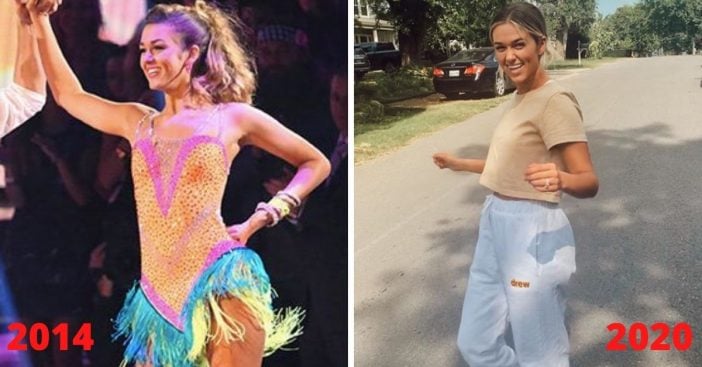 It’s no secret that social media and the digital age, in general, have played a massive role in how a lot of us live our lives, including celebrities. Sadie Robertson says that comments on social media have led her to an unhealthy view of her body, which a lot of people can resonate with, unfortunately.

Robertson competed on Dancing With the Stars back in 2014, so it’s safe to say she was in great shape! However, after filming the show, her figure began to change and this brought upon comments from ‘fans’ who noticed.

“During ‘Dancing With the Stars’ … I had this body that I never thought I’d have. I had a six-pack for two weeks, but then Thanksgiving hit and it went away. People started to comment,” Robertson says in an interview with Entertainment Tonight. She was getting comments from not only fans, but also friends and family.

“They were such innocent comments at first, like, everything was great. But whenever my body started looking a little different, that’s when the struggle came in. There were people in my life who were just really negative influences, that would say things that were not uplifting about the way that I looked and how I needed to maintain the body that I had. It was so wrong. I was insecure at the time, so I believed them and thought, ‘Oh, I need to push it.'”

While Robertson was on the dance show, she was 17 years old and pursuing a modeling career, so of course, she looked different! “People would say things like, ‘Oh, if you lost 10 more pounds, you would look like a real model.’ I was literally 115 pounds and already unhealthy. That just messed my mind up,” she remembers.

This ultimately led to her thinking very negatively about her body. “You can’t stop thinking about your body, how you look, how you should eat. You’re counting the calories, you’re sizing up your legs and all those different things. You’re just kind of completely gripped by it, and that’s kind of where I was. I would look at myself in the mirror and I would think, ‘I’m fat,’ and I was not at all.”

She reveals she developed an eating disorder

Sadie continues, “You don’t realize (at the time) that the things you’re struggling with, you think it’s just about you, but actually it affects a lot of other people around you.” In a blog post back in 2017, Robertson revealed she had been struggling with an eating disorder. She says her religion and faith helped her overcome it.

“I pretty much just took the word as it was from the Bible. It talks about how you’re beautifully and wonderfully created. I started praising God and thanking him for the way that I looked, instead of looking in the mirror and saying, ‘Ugh, I wish my arms were thinner, I wish my legs were more toned, I wish I had her eyebrows.’ … whatever it was that I would tell myself.”

She continues, “It definitely made me stop thinking about myself as much. It allowed me to be able to think of others, and how I can serve them with the body I’ve been given.” She later says, “I just felt like God was saying, ‘I’m not calling you to be this perfect person. I’m actually just calling you to be a sister and a friend to those who don’t have a sister and a friend.’ I can be confident because I was created on purpose for a purpose.”

According to U.S. Health News, “It’s estimated that 30 million Americans have struggled with an eating disorder at some point over their lifetime.”

Click for next Article
Previous article: 90-Year-Old Neighbor Says Final Goodbye To Furry Friend In Emotional Video
Next Post: The Story Behind The Famous Robert De Niro Line ‘You Talkin’ To Me?’