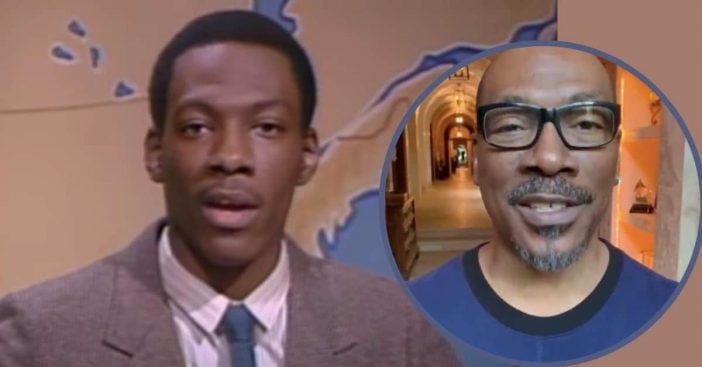 59-year-old Eddie Murphy won an Emmy Award this past weekend for outstanding guest actor in a comedy series. It was for his variety sketch show in December 2019, marking his iconic return to Saturday Night Live for the first time in nearly 40 years.

“Thank you to everybody at the Emmy’s, thank you so much for giving me an Emmy,” the actor/comedian begins his speech. “I don’t have an Emmy, it’s been 40 years since I started ‘Saturday Night Live’ and this is my first Emmy, so thank you so much.”

Eddie Murphy wins his first Emmy for return to ‘SNL’

He continues on, “I want to thank Lorne Michaels for putting this whole thing together and making this happen. And I want to thank the cast and the writers and the crew at ‘SNL.’ This was a very, very special thing for me to come back and to have the show turn out the way it did, I’m still floating from it,” he says. “And thank you to everybody for giving me an Emmy.”

Murphy’s return to SNL on Dec. 21st, 2019, was a Christmas gift that no one knew they needed. He made his iconic return with some guests as well, including Dave Chapelle, Tracy Morgan, Chris Rock, and current cast member Kenan Thompson.

In the SNL return, he appeared in every single sketch, even reprising some of his old characters. This included Mr. Robinson, which was a spoof of Mr. Rogers from Mr. Rogers Nerighborhood. Murphy also reprised his character spoofs of Buckwheat of The Little Rascals and Gumby.

He talks more about his Mr. Robinson spoof role. It, of course, received a modern twist on it given today’s day and age. “It’s like a magic trick,” he says about the role. “White people pay a lot of money and then, poof, all of the black people are gone,” he jokes. His role, Buckwheat, also made an appearance on celebrity singing show The Masked Singer recently.

Murphy originally left SNL back in 1984 to pursue other projects. These projects include box office hits since, including Dreamgirls, Shrek, Beverly Hills Cop, and 2019’s Dolemite Is My Name.

Click for next Article
Previous article: Whatever Happened To Maureen McCormick, Marcia Brady, From ‘The Brady Bunch?’
Next Post: This Is What Happened To ‘Bewitched’ Star Elizabeth Montgomery, Her Magical Life And Untimely Death