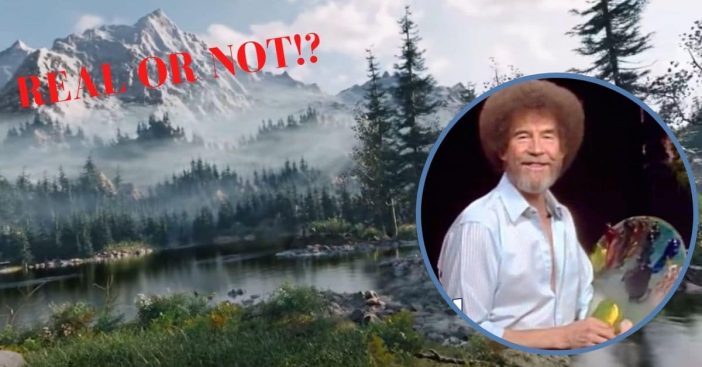 Bob Ross was the creator and host of the TV show The Joy of Painting which ran from 1983 to 1994. On the show, he taught his viewers how to paint beautiful artwork. His work has continually been celebrated throughout the years in various ways, one of them being the show being streamed live each weekend on the streaming service Twitch. However, someone has taken it to the next level and has created a stunning 3D world out of one of his paintings.

YouTuber CG Geek went all out in order to create this 3D world with not only Bob Ross paintings but with real-life textures as well. He videos himself going out into the wilderness, recording different things like leaves and moss on rocks to help recreate different yet realistic scenes.

Check out this 3D world inspired by Bob Ross

The YouTuber then took the photos he took and uploaded them to a computer application that adapts photos into 3D photo scans. Once he had all of the photos uploaded, he was able to maneuver the photo on-screen to make it look similar to that of a Bob Ross painting. It’s actually pretty neat and impressive what technology can do these days!

RELATED: Why It Is So Unusual To Find An Original Bob Ross Painting

He also took photos of mountains, pine trees, and more, really accentuating and emphasizing the kind of nature-esque paintings that Bob featured on his show. All of these photos were then adapted into the 3D scanner and maneuvered as such to create a stunning nature vibe that mimicked one of Bob’s paintings. It’s important to remember that CG Geek used his own photos and in no way, shape, or form used an actual Bob Ross painting to create a 3D world. So impressive!

One really cool addition to this 3D world was the option of rushing lake water, completely animated. Of course, you can’t mimic this in actual, physical artwork, so this 3D/technological spin was genius and so cool to see. The movement/animation didn’t stop there either; he used the same technique on the pine trees, making it look like wind was blowing them in the breeze.

In addition to all of these cool features, he also added in the ability for camera movement. All he did was take a video outdoors and upload it to the same 3D scanner, which then added in some movement to the scene. He also featured himself in the 3D world by taking a video of himself in front of a green screen and uploading it to the application. One lost, awesome, and honorary feature for Bob Ross was that CG Geek uploaded a photo of Bob and was able to set him in the scene, fishing on a boat in the lake.

Be sure to check out the entire video below to see the process and finished product. What a great salute to Bob Ross and his indescribable talent! (CG Geek also wears a Bob Ross wig throughout the whole video, which is a cute and funny way to honor the late artist.)

Click for next Article
Previous article: Celebrating The 55th Anniversary Of ‘I Dream Of Jeannie’: Barbara Eden On Her Iconic Role
Next Post: Multibillionaire Happily Ends Up Broke In Small Apartment By Donating Everything