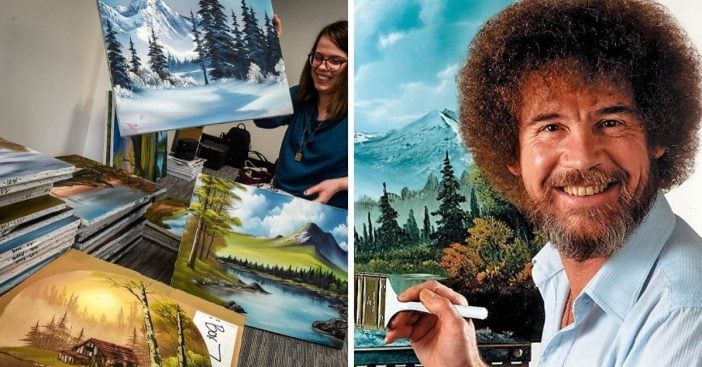 During his career, Bob Ross painted over 1,000 landscapes. In addition, Bob once admitted having painted over 30,000 paintings in his lifetime! However, if you try to find one of them, you may be disappointed. Many people have tried to find an original Bob Ross painting at auctions, galleries, and online… only to find dead-end after dead-end.

Turns out, almost all of the paintings are still held at Bob Ross, Inc. They are kept in cardboard boxes in a room, with numbers on the side. The owners don’t talk about selling the paintings and likely don’t plan to. The company Bob Ross, Inc., however, does sell painting supplies, videos, books, T-shirts, and other Bob Ross swag.

You might be surprised to learn that Bob actually did every painting on the show three times. He tested one before the show, painted one during the show, and did one after. That is why there are still so many sitting in the offices!

Even though Bob has been off television for 20 years, and passed away in 1995, he still remains a huge cultural icon. These days, you can see some of his paintings in person at the Smithsonian Museum. The paintings on display are “Blue Ridge Falls,” “On a Clear Day,” as well as a stepladder he used as an easel, and two handwritten notebooks that he used.

So sadly, if you are in the market to purchase an original Bob Ross painting, you’re out of luck. His show “The Joy of Painting” still airs on PBS every day, and many versions are available online these days. In conclusion, watch an episode below: