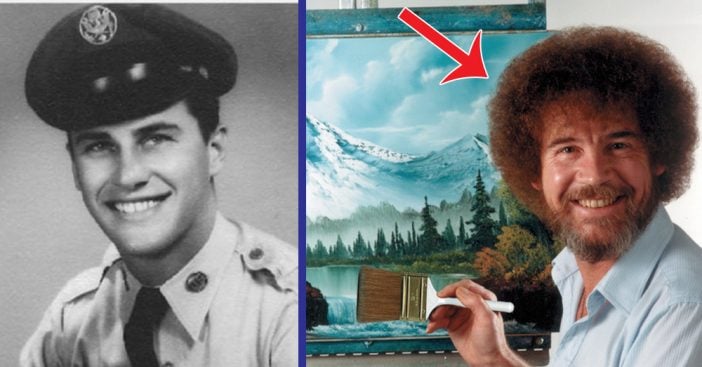 Bob Ross, just his name brings a calm. The soft-spoken painter who didn’t make mistakes, only “happy accidents,” painted on PBS stations in the 1980s and 1990s. His untimely death in 1995 at the age of 52 occurred just when he was exploding on the pop culture scene. He appeared in a hip MTV spot back when MTV was hip, and then his sudden death seemingly extinguished all he built.

But… Bob Ross lives on! There’s a Bob Ross bar crawl, and someone’s recreating all 403 of his televised paintings. Bar crawl aside, there’s so much that people don’t know about the famed painter, so much will surprise you about the man with the sweet pipes and sweeter ‘fro’. Enjoy these 11 most definitely weird, but totally true facts about the legend, Bob Ross:

Bob had a rival

To the viewer, Bob Ross is that happy guy who paints happier trees, and clouds, and rivers. To the artist, Bob Ross is a guy who paints in a very specific and unique way: wet on wet, where the paint is applied on a still-wet coat to create the finished piece. Wet on wet dates back to the 1300s, and French impressionists used the method up to the early 20th century. The word on wet on wet is that “no serious artist uses it,” and then Bob Ross came along and … well, critics don’t really like him either, but that’s not the point.

Ross himself began painting in Alaska and learned his technique from a famed (sort of) wet on wet painter, Bill Alexander. The German-born Alexander appeared on public television before Ross ever did, in the 1970s. Ross dedicated an episode of his Joy of Painting program in season two to his teacher and mentor, but things soured from there. By 1991, Ross wouldn’t even mention Alexander by name, telling the New York Times, “(H)e is our major competitor.”

Bob Ross Is A Video Game Character – Watch Below

He was a mean Air Force guy

Bob Ross is the last guy you’d expect to be angry with anyone, but he wasn’t always a soft-spoken painter. Ross was born in Daytona Beach, Florida, and made his home in Orlando. If you’re wondering how a Florida man made it up to freezing Alaska, he did it the honest way: by joining the military.

Bob Ross enlisted in The Air Force at age 18 and was stationed at Eielson Air Force Base in Alaska—a little south of Fairbanks. Ross served 20 years, achieving the rank of master sergeant, before retiring.

As recognizable as his sweet voice, the afro Bob Ross sports is the stuff of legend. It’s a meme in itself, and every knock-off Halloween afro seller can thank every single sale on people dressing up like Bob Ross. But Bob’s fro is as real as his rivalry with Picasso. The trademark hair is just a perm.

But wait, it gets better. He got a perm to save money—no need to waste precious cash on a haircut when it will all just grow into a big ball of awesomeness. And he hated it. He hated every stinkin’ curl on his skull, but he couldn’t undo his money-saving strategy. The Afro became the logo for his company. His business partner Annette Kowalski said, “He could never, ever, ever change his hair, and he was so mad about that. He got tired of that curly hair.” He was the only one.

He didn’t make any money from his PBS show

Bob Ross achieved fame for his PBS show, but it didn’t pay the bills. In case you forgot, PBS stands for Public Broadcasting Service—as in a nonprofit station that gets 15 percent of its funding from the government. So obviously Ross wasn’t swimming in it as a PBS star, but he had to make something, right? Eh … not really.

Ross said that he never got paid for his Joy of Painting program. As in nothing. “People see you on television and they think you make the same amount of money that Clint Eastwood does,” he said. “But this is PBS. All these shows are done for free.” No wonder Clint Eastwood never permed his hair! Ross made his money teaching and selling books, and of course, selling some of his paintings. Ross also sold videos (remember those?) of his painting system—which were really three-hour workshops that went into more detail on his style.

In 2014, the statistical website FiveThirtyEight finally answered the paradox that has kept the mortal man up all night: What exactly did Bob Ross paint? Joy of Painting aired 403 times—Ross only painted 381 times (the others featured guests). As FiveThirtyEight explains, there were 3,224 possibilities for his paintings (they’re detailed oriented). Do you know what Bob liked? Trees. A whopping 91 percent of his paintings contained at least one tree. Do you know what Bob didn’t like? Flowers. Flowers are for suckers. Only 2 percent of his paintings contained flowers. He only painted palm trees 2 percent of the time also, but what do you expect? They’re everywhere in Florida. He was probably sick of ’em.

If Ross painted a tree (singular), there is a 93 percent chance he’d paint a second tree. Because trees shouldn’t be alone, obviously. Surprisingly, for a guy known for his “happy little clouds,” his paintings only featured clouds 44 percent of the time. But the only thing he hated more than flowers and palm trees were people. In his 381 paintings, only one featured a person. It was in silhouette against a tree—a lonely cowboy. And of the 18 percent of the time that he painted cabins, only one had a chimney. Must be pretty cold in Bob Rossland.

His originals are worth bank

Actually coming across an original Bob Ross isn’t as easy as it seems. In the 381 programs he recorded (thanks again, geeks at FiveThirtyEight!), he painted three per show—one he painted on camera, one beforehand that he used as a guide, and one for close-ups and photography later (ah, the magic of editing). That means he produced 1,143 paintings during his show. Where are they?

For starters, he donated most to PBS stations, who auctioned them off. That presents a little bit of a problem in the art world. Provenance is a fancy word in the art world for “I got this from the artist, here’s the proof.” The “I bought it from the PBS station in Peoria” isn’t going to cut it. But if somehow you have provenance or just a lot of cash around, you can purchase an original Bob Ross—and they ain’t cheap. A Ross can run over $10,000. That’s a whole lot of happy trees.