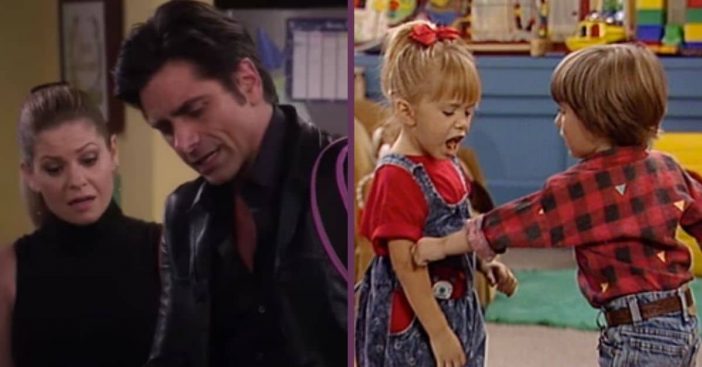 If you watched Full House back in the day, you know that Uncle Jesse wasn’t always the loving, father-like figure that the girls looked up to. He started out almost as a Fonz-like character. His life was all about music, girls, and good hair, and that’s about it. However, after spending a lot of extra time with DJ, Stephanie, and Michelle, he developed such a deep bond with them and it changed his character and personality forever.

Mary-Kate and Ashley Olsen both took on the role of Michelle Tanner back in the Full House days. However, by the time Fuller House came around, they had already been long-retired from acting. There were a lot of rumors that they were asked to come back and outright refused. However, the twins claim they were never asked to begin with. They still found ways to incorporate mentioning Michelle in Fuller House episodes, but one didn’t sit so well with viewers.

In season 5, episode 15, “Be Yourself, Free Yourself”, Jesse is upset about a biting incident that took place at school involving their adopted daughter, Pamela (Madilynn Jefferson). His wife, Becky, is out-of-town in Nebraska, so that leaves Jesse to confide in DJ (Candace Cameron Bure), who is now much older and has kids of her own.

Advising his daughter to get back at who bit her

After recapping the whole situation to DJ, Uncle Jesse thinks about just telling his adopted daughter to bite back whoever bit her as an “eye-for-an-eye” type of thing. DJ doesn’t agree with this, and suggests maybe having the teachers at school deal with the situation instead of him getting himself involved. However, Uncle Jesse is pretty adamant about wanting his daughter to teach these kids a lesson, saying, “all those years ago when someone pinched Michelle I said ‘Go pinch him back!'”

In this line, he is referencing a Full House episode called “A Pinch for a Pinch.” In this episode, Michelle is getting bullied by one of her classmates, Aaron (Miko Hughes). Initially, Jesse does tell Michelle to get back at him by pinching him, but after a talk with Danny (Bob Saget), he realizes that it’s not the best advice. “If you have a problem, you should try to solve it with words like, “knock it off” or, the ever-popular, “buzz-off Bucko.” And if that doesn’t work then you find a parent or a teacher to help you. But absolutely no pinching or hitting,” he advises her.

So, this was a bit of a ‘detail’ mixup that hardcore Full/Fuller House fans did take notice of. Maybe Uncle Jesse was just so fed up at this situation that he could only recount the ‘bad advice’ he ever gave the kids growing up?