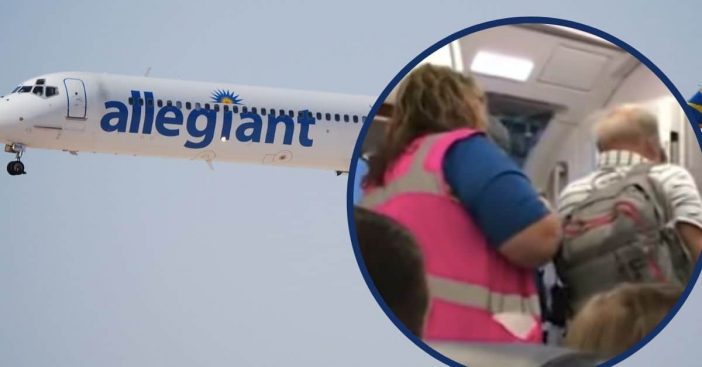 A passenger aboard Allegiant Air was removed after allegedly telling a flight attendant to wear their mask. “I just asked somebody to put on their face mask,” the man in question is heard saying in a now-viral video. The video does show a flight employee wearing a mask asking a man named Mr. Peterman to get off the plane.

“Either you come off or I get the law enforcement,” the attendant says. “You are totally wrong,” one passenger says to the woman. “This is ridiculous,” another chimes in. “I’m just doing what I’m supposed to do,” the employee responds.

“Captain, can I have a word with you please before I get kicked off? I just asked someone to put on their face mask. That’s all I did,” the man asks to the pilot of the aircraft. A rep for the airline has released an email to the NY Post, saying that the “passenger became disruptive during the pre-flight safety briefing. Following the announcement, the passenger persisted in making threatening statements to the flight attendant, to the point of harassment.”

The spokesperson goes on to add that the passenger was “interfering with a crew member is a violation of FAA regulations.” “Customer and crew safety is paramount. … [As] the disruptive behavior continued, the decision was made to deplane the passenger. He was re-accommodated to a later flight,” she adds.

A statement to Newsweek from the airline additionally says that pre-flight safety “includes reiteration of our inflight face-covering policy.” The airline says “the flight attendant giving the safety briefing lowered their mask for speaking into the PA so the briefing could be understood.” However, it was the brief lowering of the mask that caused this disruption from the passenger.

The NY Post reports that Allegiant has received a lot of complaints from travelers that their employees aren’t wearing their masks correctly or are not wearing them at all. “@Allegiant how am I supposed to feel safe flying when my chatty Kathy flight attendant isn’t even wearing her mask properly and keeps taking it off?!? Safety first or last…?” someone on Twitter writes.

People don’t think Allegiant is in the right

Another chimes in, “Dear @Allegiant, if you’re going to tell people to wear masks on your flights, ya better have your flight attendants enforce it. We’re in a freaking pandemic.”

Allegiant went on to post on September 2nd: “We earned the highest score for COVID-19 traveler safety in a recent ranking of North America’s airlines! Safe Travel Barometer conducted the independent audit, evaluating more than 150 airlines.”

Click for next Article
Previous article: Lawmakers Push To Award D-Day Hero With Medal Of Honor
Next Post: Diana Rigg, ‘The Avengers,’ ‘007,’ ‘Game Of Thrones’ Actress Dies At 82