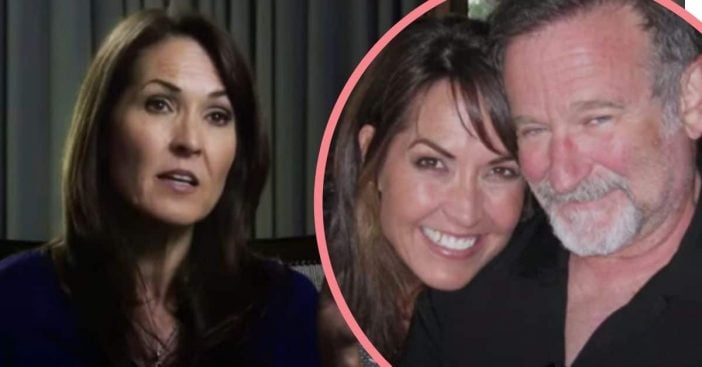 Robin Williams’ widow, Susan Schneider Williams, has opened up about their relationship prior to his death. She recently spoke with Today‘s Hoda Kotb about the new documentary Robin’s Wish. The documentary details Robin’s fight with Lewy-body dementia.

“This was a man who was incredibly rich and deep and versed in so much about humanity and culture, and his humor was like this secret weapon,” Susan remembers. “There were so many times when he would see someone needed a lift, and then he would just inject a little bit of humor in just the right way to make a difference.”

“Robin and I knew there was so much more going on. Robin was right when he said to me, ‘I just want to reboot my brain.’ In that moment, I promised him that we would get to the bottom of this. I just didn’t know that would be after he passed,” she continues.

She even reveals that doctors advised them to sleep in separate beds for medical reasons prior to his death. Robin had insomnia, and doctors thought separate beds would help him get more sleep. “He said to me, ‘Does this mean we’re separated?'” She recalls. “That was a really shocking moment. When your best friend, your partner, your love — you realize that there’s a giant chasm somewhere, and you can’t see where it is but that’s just not based in reality. That was a hard moment.”

What truly is Robin’s wish?

Susan also talks about the title of the documentary, saying that Robins’ “wish” was to “help all of us be less afraid.” She says to Entertainment Weekly recently, “We had been discussing what we wanted our legacies to be in life; when it was our time to go, how we wanted to have made people feel. Without missing a beat, Robin said, ‘I want to help people be less afraid.'”

Robin’s Wish is now available to rent and own on-demand. Watch the official trailer for the documentary below.

Click for next Article
Previous article: How Bradley Cooper Took Care Of His Mom During Quarantine
Next Post: Marie Osmond Is No Longer With ‘The Talk’ After Just One Year